Russia's Sale of the S-400 to India: Part of a Bigger Defense Partnership? 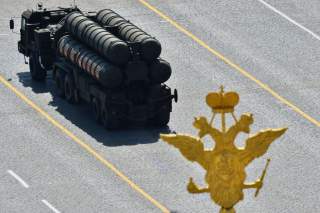 The deal, announced on October 6, will make India the second state after China to purchase Russia’s S-400 system. Russia’s flagship anti-air missile defense system, the S-400 is a fourth-generation improvement over its predecessor, the S-300, that boasts an effective operational range of up to 400 kilometers can engage with targets moving at up to 17 km/hour. The S-400 poses an attractive alternative to the PAC-3 variant of the American Patriot Missile Defense System, being cheaper than its U.S. competitor and exceeding it in raw performance metrics. The S-400 is due to be outfitted over the coming months with Russia’s latest 380 kilometers range 40H6E missiles, though it appears unlikely that these expensive, cutting-edge missiles will be shipped to India when they haven’t yet been widely distributed among the Russian armed forces.

New Delhi’s choice of weapons supplier has aroused Washington’s ire in the current climate of escalating tensions between the United States and Russia. In the months leading up to the deal, the U.S. government has warned India that the purchase of the S-400 system would constitute a potential violation of CAATSA—or Countering America’s Adversaries Through Sanctions Act—designed to divert military resources from Iran, Russia, and North Korea. CAATSA contains a waiver clause explicitly designed not to alienate countries such as India. But for Washington to essentially greenlight a deal of this size risks establishing a harmful precedent for future CAATSA enforcement, especially as it relates to Turkey’s stated intent to install S-400 systems over the following year. The Trump administration has yet to announce whether or not it plans to extend a waiver to India.

India’s decision appears to be guided by a set of economic as well as strategic concerns. On the former, India’s long-standing employment of formerly Soviet, and now Russian military equipment makes the S-400 easier and cheaper to integrate with the infrastructure of the Indian armed forces. In fact, Indian imports account for as much as 35 percent of global Russian arms sales. Geopolitically, New Delhi seeks to deter the looming specter of a two-front war against Pakistan and China. Seen by some as a potent surface-to-air counter even against fifth-generation stealth aircraft like the F-35, Beijing will be forced to account for the newfound operational threat of the S-400 in their ongoing border skirmishes with India. This is also a chance for India to reassert their Cold War tradition of neutrality, signalling that it has no interest in acting as Washington’s proxy in the economic containment of Russia.

This will be the first major Russian arms deal since the Soviet collapse to be conducted in Russia’s currency of rubles, a signal that the Kremlin seeks not only to challenge Washington as a leading weapons supplier, but to undermine the primacy of the dollar in strategically vital regions. At the same time, India would be remiss not to see the diplomatic opportunities stemming from the Trump administration’s increasingly confrontational stance toward China and the ongoing deterioration of U.S.-Pakistan relations. India’s purchase of S-400 systems is the latest entry in Prime Minister Modi’s geopolitical tightrope act between the maintenance of India’s historical Russian ties and seizing on opportunities to balance with Washington against Indian adversaries.