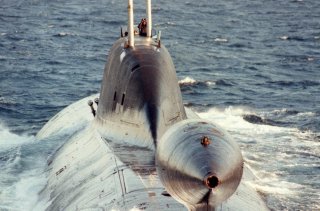 Perhaps no other Russian submarine has elicited as much speculation as Russia’s Losharik submarine, alternatively known by its hull number AS-31. It has more than a few unique abilities — let’s take a closer look.

One of a Kind

The Losharik is arguably one of Russia’s most advanced submarine designs. Intended to conduct deepwater operations on the ocean floor, the submarine hull is a unique design. Unlike many submarines that feature a single or double cylinder hull, the Losharik in contrast is made up of seven interlocking titanium spheres encapsulated into a single cylindrical submarine hull.

While the extensive use of titanium in a submarine is both an engineering challenge as well as significantly more costly than a traditional steel hull design, the use of a lightweight and high-strength metal like titanium allows the Losharik to withstand intense water pressure at the seafloor and it therefore integral to the submarine’s mission. In keeping with the most advanced in submarine propulsion, the Losharik is powered by a single nuclear reactor, allowing it to stay underwater for a virtually unlimited amount of time.

Compared to other combat submarines, the Losharik is actually not that large — in fact, it is small enough that it is carried by a mother submarine, mated to the larger submarine’s hull. Once released, the Losharik is able to “sit” on the seafloor thanks to several retractable skids.

Although the submarine is nominally operated by Russian Navy personnel, the Losharik is thought to operate under the command of the GUGI (Main Directorate Deep-Sea Research), lending credence to theories about the submarine’s potential espionage role.

From Russia with Love

Like the submarine’s specialized design, so too does the Losharik undertake special missions. Speculated mission profiles include tapping into undersea telecommunications cables, used to relay internet traffic and other information.

Cables like these that stretch between continents on the seafloor are particularly vulnerable, as they are virtually unprotected — severing even a single of the multitude of underwater cables could throw internet traffic, bank transactions, or a variety of telecommunications haywire.

A near-catastrophe struck the Losharik in 2019. During the course of an underwater operation — nominally taking seabed measurements in Russian territorial waters — a fire broke out onboard. Though the submarine was able to surface and the crew members successfully put out the fire, there were 14 fatalities.

Though speculative, some commentators have suggested that the cause of the fire was a short-circuit somewhere in the sub’s batteries. Still, despite the fire, the submarine is repairable. Russian sources claim the sub will reenter service in 2025.