Is Russia's Su-25 Really Similiar to the A-10 Warthog? 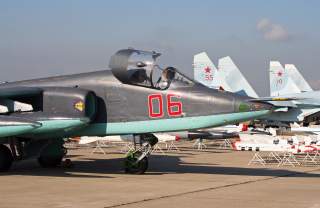 The Su-25 is one of the most visible signs of the Russian Air Force’s might. Since its debut during the Soviet-Afghan War in the 1980s, the Su-25 has seen service in every conflict involving Soviet or Russian forces, from Chechnya to Georgia to Syria.

Observers have often compared it to the A-10, but that comparison misses some of the nuances of how they are employed. Regardless, the Russian defense ministry plans to keep the Su-25 around in the foreseeable future. But how does it plan on accomplishing that goal?

The development of the Su-25 roughly mirrors that of the A-10. The Soviet Air Force saw the need for a survivable low-level attack aircraft to supplement its current attack fleet. Before the Su-25, Soviet attack aircraft relied on speed for survivability. Aircraft like the Su-17, Su-22, MiG-23BN, and MiG-27 all had only one engine and no armor (the latter being redesigns of the MiG-23 airframe for ground attack).

Combat experience in Afghanistan showed that such configurations were vulnerable to ground fire when conducting missions at low altitude. Armor and two engines needed to be added to improve survivability at the cost of speed.

Enter the Su-25, an aircraft built from the ground up to conduct ground attacks at low altitudes and speeds. It featured significant armor on the bottom and the front of the aircraft and had two heavy duty engines for increased survivability. The design featured straighter wings than those used on fast jets, allowing for better maneuverability and increased lift at the lower speeds the Su-25 was expected to operate at.

A laser designator/rangefinder similar those used on the MiG-27 was installed in the nose to allow for use of laser-guided missiles. However, the Soviets’ thirty millimeter rotary cannon the GSh-6-30 had problems on its mounting on the MiG-27, so Sukhoi opted to put the simpler, lower-rate-of-fire Gsh-2-30 on the Su-25 instead. Regardless, the primary weapons the Su-25 was expected to employ in support of ground forces were the rockets and bombs on its wings, not the cannon.

The main problem with the Su-25 is that while it had a decent complement of weapons for air-to-ground attack in the 1980s, it was being left behind in the dust by newer developments in weapons such as the Vikhr anti-tank missile. The ECM systems also were becoming antiquated.

As a result, attempts to modernize the Su-25 were made. The first was the Su-25T, a version that focused on improving the anti-tank capability of the Su-25. To accomplish this, the Su-25T mounted the Shkval and Mecury electro-optical systems that allowed the plane to detect and track targets from much longer ranges, providing functionality similar to that given by Western targeting pods. These systems were controlled through a monitor in the cockpit, mirroring the ground attack MFDs in the A-10C.

The Su-25T could also fit a much wider fit of weapons, including the Vikhr anti-tank missile that could be carried in two six-packs on each wing and the advanced R-73 anti-air missile. However, the Su-25T project was canceled after only a few examples were produced due to the great cost of electro-optical systems installed.

Thus the regular Su-25 would continue to serve in Chechnya and Georgia under the same configuration as in the 1980s. While there was the short-lived Su-25TM line that also featured advanced avionics, the primary upgrade “route” for the Su-25 would be found in the Su-25SM.

The Su-25SM was conceived as a way to modernize the Su-25 without being as complex as the earlier attempts. The key feature was the integration of an onboard radar and a vastly improved avionics fit. The onboard radar, while not nearly as powerful as those on dedicated fighters, allows the Su-25SM to shoot the R-77 and R-27 air-to-air missiles.

But the greatest improvement was the “Bars” navigation system that includes a digital moving map and a satellite navigation receiver. With these features, the Su-25SM is able to get to the target, get off the tarmac faster, and generally just perform better and more efficiently as the workload of the pilot is reduced.

Other upgrades included an anti-surge system for the engines, which expanded the envelope in which the pilot could safely employ various weapon systems without worrying about the gasses affecting the engine and a new radar warning station (L-150 Pastel).

As Su-25SMs are being produced, Russia is looking to the future with the Su-25SM3 upgrade. This can be seen as a further iteration on the same improvements featured on the Su-25SM. Survivability and anti-missile countermeasures are improved by the addition of UV missile launch detectors in the Vitebsk-25 SEAD/ECM set and an updated version of the L-150 Pastel. The targeting package in the nose is further improved in the SOLT-25 module which adds thermal imaging and improved zoom.

Also added is the new SVP-24 “Gefest” precision dumb-bombing system. The Gefest uses precise information about the flight characteristics and position of the aircraft to set a computer calculated release point (CCRP) for a bomb, which can allow it to deliver a bomb onto a specific grid with good accuracy. While Russian media has hyped this system up to allow for dumb bombs to “be as effective as” precision bombs, this is only really true on static targets and ignores the other benefits PGMs have in hitting moving targets.

With the Su-25SM3 upgrade, the Russian Air Force finally has a solid kit that could upgrade their fleet of vintage Su-25s to a modern standard. Compared to the A-10C, the Su-25SM3 is faster and has the advantage of having its targeting system being stuffed into the nose, as opposed to relying on an external pod. However this also means that the targeting system has a more limited range of motion as its looking out of a small window in the nose.

The level of integration of electro-optical PGMs is probably less mature as well as the A-10C has been using similar systems for almost twenty years now and was originally built to utilize the electro-optical Maverick missile. Conversely, the Su-25 always focused more on laser-guided munitions. EO munitions have the advantage of being fire and forget, once the electro-optical seeker is locked on the target, the missile will guide regardless of the motion of the plane. With a laser, the plane must guide the missile in with a laser designator and keep flying towards the target until it hits.

Overall, while the planes are broadly similar, one can see how the strengths of each plane diverge when looking into which subsystems are more developed. The A-10, which focuses on the gun and delivery of electro-optical PGMs, versus the Su-25, which focuses on accuracy of “dumb” bombs and rockets from the wings and laser-guided weaponry.