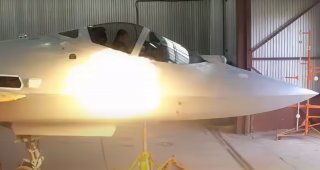 As the Su-57 moves further along in serial production, video footage has emerged of Russia’s fifth-generation fighter firing its onboard cannon.

The brief clip, first picked up by The Drive, was originally published on the Russian media network Telegram and later re-uploaded to Youtube. The video shows an unpainted, ground-based Su-57—possibly a dedicated testbed model—firing its improved 30mm GSh-30-1 cannon at a nearby paper target. The Su-57’s GSh-30-1 is buried in the right fuselage side and boasts 150 rounds of ammunition. The cannon enters a fire-ready position via a rotating mechanism that exposes the muzzle, also including a rear hatch to release gas.

It remains unclear exactly how the Su-57’s GSh-30-1 has been improved as compared with the original, Soviet 1980’s model. This is not the first footage of the GSh-30-1 in action—a video published on Youtube in 2019 showed an Su-35S fighter unloading the cannon while airborne. The gun is likewise installed on a slew of older Soviet fighters, including the Su-27 and MiG-29. The short recoil-operated heavy cannon packs a major punch, but at the expense of potentially rocking the airframe with extreme vibration and generating elevated noise levels. This could be especially problematic for a stealthy fighter like the Su-57; still, Soviet engineers have demonstrated that the cannon’s recoil can be partially mitigated with creative mounting solutions. The fire test depicted in this clip could very well be part of those efforts.

The Su-57’s cannon can be useful in certain low intensity air-to-ground and air policing scenarios, though it’s only a small part of the fighter’s prodigious payload potential. With twelve hardpoints split evenly across internal and external sections, the Su-57 is compatible with a raft of air-to-air missiles. The successor to Russia’s 2000’s medium-range R-77 missile, the K-77M beyond visual range (BVR) radar-guided missiles bring an active electronically-scanned array radar seeker and an impressive engagement range of just over 150 km. The K-74M2, an advanced iteration of the Soviet R-73, will occupy the short-range slot. The Su-57 will likewise boast the hypersonic, long-range 37M missile that is slated to enter service in the coming future. Despite being largely intended for an airpower role, the fighter also accepts the Kh-38 tactical ground missile and several guided bombs from the KAB family. Finally, there are unconfirmed reports that the Su-57 can carry a variant of Russia’s nuclear-capable, hypersonic Kh-47M2 Kinzhal missile.

The Su-57 entered serial production in the summer of 2019, following a shock announcement by the Kremlin that Russia’s Defense Ministry plans to procure as many as seventy-six units by 2028. The news defied a slew of prior western projections alleging that the fighter would not be ready for mass production until the late 2020s. Still, Moscow had to make some short-term compromises in order to proceed with this brisk production schedule. It is widely believed that the Su-57 cannot supercruise—that is, fly at supersonic speeds without the use of stealth-compromising afterburners—without its new, bespoke Izdeliye 30 engine. The first serial Su-57 units will reportedly enter service with the older AL-41F1 stopgap engine; Izdeliye 30-equipped serial Su-57 units are not expected until 2022.