Russia's Sukhoi Superjet 100 Could Soon Be Flying In Iranian Skies 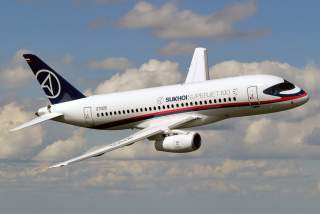 Iran is on the verge of signing a contract to purchase a fleet of Russian Sukhoi Superjet 100 aircraft, according to recent news reports.

“If the Iranian airlines want to use this aircraft (Superjet 100) and the seller is willing to sell it to Iran, the Civil Aviation Organization is ready to issue its final comment on this aircraft…but this aircraft has adhered to world standards and is flying currently, therefore there is no reason for us to reject it.”

The Sukhoi Superjet 100 is a regional aircraft that had its first flight in 2008, with a seating capacity of up to 108 and a maximum cruise speed of up to 870 km/h. It is powered by the French-Russian-made PowerJet SaM146 engine. The SSJ-100 was designed to compete favorably with the likes of the Airbus A220 and Embraer's E190.

The Sukhoi Superjet 100 has been a top contender to replace the Iran’s aging aircraft lineup, but talks have stalled over Iranian concerns that the Superjet 100 is composed of over 10 percent U.S. parts and therefore runs afoul of American sanctions against Iran.

“Over the last three years, Iranian airlines have sent requests to the manufacturing company of the SSJ-100 with the aim of purchasing these aircraft. Unfortunately, there is one hitch. The company must receive permission from an American supplier of various components.”

While a relaxation of the American sanctions on the sale of U.S. aircraft components to Iran is exceedingly unlikely, Tehran has remained hopeful that that the manufacturer will tweak the Superjet 100 production process to fall below the threshold of U.S. Treasury Department jurisdiction. “In any case, there is now talk of lowering reliance on American components. The Iranian side waits for this question to be resolved, so that we can move on to the purchasing stage,” said Sanan.

It now seems that these hopes have been borne out. The Superjet 100 underwent a significant rebranding campaign over the summer of 2018. Sukhoi Civil Aircraft (SCAC) announced a new version of the aircraft that drops the “Sukhoi” label and adds an “R”: the SSJ100R.

The SSJ100R’s sole major distinction from its predecessor is its reduction of foreign components by 10-15 percent, according to SCAC director Alexander Roubstov. Notably, the SCAC is planning to replace the SaM146 engine with the fully Russian-made Aviadvigatel PD-14.

The new SSJ100R marks Russia’s entry into the burgeoning market of countries looking to purchase modern airliners while skirting around both current and prospective American sanctions, with Iran being first in line. Iran is looking to purchase 500 new aircraft, according to Abedzadeh. It is not clear how many of these prospective orders can be filled by the SSJ100R and over what timespan, but Russia’s recent procurement of 100 of these aircraft can be taken as a clear signal of their intention to become Iran’s primary supplier

The SSJ100R is but one plank of Russia’s strategy to draw Iran into its economic orbit on the heels of several rounds of American sanctions over the past several years. Last month, Tehran and Moscow struck a “barter agreement” whereby Iran would ship Russia the equivalent of 100,000 oil barrels per day (B/D) in exchange not for dollars, but for Russian “technology and equipment.”

Mark Episkopos is a frequent contributor to The National Interest and serves as a research assistant at the Center for the National Interest. Mark is also a Ph.D. student in History at American University. This article first appeared in December 2018.