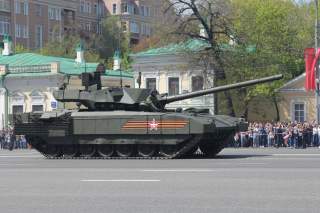 When Russia first unveiled the T-14 Armata tank to the public in 2015, western militaries took note of next-generation juggernaut’s futuristic and flexible design, which was built to replace several armored ground units. But unfortunately for the Russian armed forces, a sluggish economy hit by sanctions and massive corruption doesn’t appear to be able to produce the revolutionary tank in significant numbers.

- Deputy Prime Minister Yury Borisov told Russia’s Itar-TASS news service earlier this week that at the price of $4 million per unit, the Armata was ‘rather expensive’, and that the upgraded T-72BM tank was sufficient to deter NATO. By comparison, the M1A2 Abrams runs around $6 million per tank.

- The T-72BM, which run around $2 million apiece, has been the mainstay of the Russian tank force since the 1970s, and attempts at replacing the aging system with the T-80 and T-90 tanks also proved more than the recovering Russian economy could bear.

- The T-14 Armata tank featured upgraded armor, computerized systems, a new 125mm smoothbore cannon system designed to take on the latest in western armor, and a range of over 500 kilometers. With a multipurpose chassis, unmanned turret and crew of two, the Armata seemed poised to revolutionize the worlds largest tank army.

- The unmanned turret system allows for more mechanization of tasks. The Armata also features top of the line explosive reactive armor, and also an active protection system to fend off anti-tank weapons.

The Russian defense budget, although being one of the highest in the world at $61 billion, may not be high enough to take on all of the simultaneous modernization that the Russian armed forces desire. Along with the Armata production problems, the Su-57 5th generation stealth fighter has also been shelved for the time being due to budgetary constraints.

Unlike the U.S. and it’s sky-high weapons export figures, Russia has not been able to sell it’s high end weapons to third parties to subsidize the research, development, and production of next gen systems. And although the modernized T-72BM can hold the line for now, the development of the M1A2 SEPv3 Abrams tank, and the upgraded Leopard 2A7 may make the mainstay of the Russian armed forces obsolete sooner than Russia can replace it.