Russia's T-34 Tank (That Crushed Hitler) Is Making a Comeback 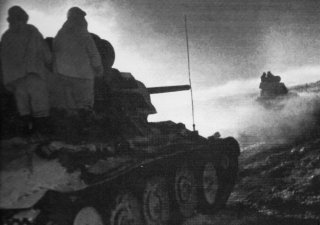 This week a number of World War II-era Soviet T-34/85 tanks were spotted on the streets of Moscow. It wasn't a coup with vintage equipment, but rather a staging exercise to prepare for the upcoming Victory Day parade. The Russian Ministry of Defence released a video that highlighted the arrival of the tanks, and announced that servicemen from the 1st Tank Army would be training to create crews for the tanks during the upcoming celebration, which will mark the 75th anniversary of the end of the Second World War – known as the Great Patriotic War to the Russians.

According to SputnikNews.com, which quoted official information, "the repaired tanks include vehicles that participated in the operation to take Berlin in 1945."

The news sources didn't state exactly how many tanks will participate in the upcoming Victory Day parade, which according to the Kremlin will not be postponed despite the spread of COVID-19 in the Russian capital – even as 440 new cases of the coronavirus were reported earlier this week. The event is still scheduled to take place at Moscow's Red Square on May 9.

It would be difficult to know for certain if any of the particular T-34 tanks that will be used in the parades did in fact take part in the Battle of Berlin in 1945. By the end of the war, the Soviets produced 57,339 of the T-34s – and those accounted for 55% of the entire Soviet Red Army's tank force. It was the most-produced tank of all nations involved in the Second World War.

In fact, it was just last year that the Russian Federation received 30 World War II-era T-34/85 tanks from Laos – as part of a three-way deal that also involved Vietnam. Laos had been the last active operator of the T-34/85 anywhere in the world, and with that deal from early 2019, it marked the official end for the tank in active service. Those particular tanks were provided to Laos during the Cold War, and while the Russian Ministry of Defense had maintained that those were 1944 production models, some military analysts have suggested that these may have been a Czechoslovakian version produced in the 1960s.

The tanks from Laos, which the Russian Federation announced were to be used in movies, displayed in museums and for parades such as this year's Victory Day celebrations, may have also been among the 300 T-34s that had been supplied to North Vietnam in the late 1950s according to data from the Stockholm International Peace Research Institute (SIPRI).

Whether it was these actual tanks that took part in the fighting in Berlin at the end of the Second World War shouldn't really matter. It is simply fitting that any World War II T-34s will be present to mark the 75th anniversary of the Red Army's victory.