Russia's T-60: A Light Tank That Went to War Against Hitler 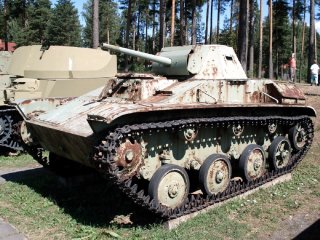 The German invasion of the Soviet Union in June 1941 caught the Red Army completely off-guard, and the Soviets lost vast amounts of both men and material. One bright spot for the Soviets was that its T-34 and KV tanks more than matched the German's standard anti-tank weapons. The Germans hadn't expected to face such advanced tanks and soon adjusted their attacks to avoid direct tank-to-tank engagements.

The infamous T-34 and equally resilient KV (Kliment Voroshilov) tanks were able to hold their own, but other Red Army tanks didn't fare nearly as well. This included the obsolete T-38 amphibious scout tank, which was just a modernized version of the earlier T-37A light tank but was considered a marginal improvement at best.

The T-38 had seen use in the Winter War with Finland (1939-40), when it was found that its light armament and thin armor, which could be penetrated by rifle and light machine gun fire, was little more than a metal deathtrap. In addition, the T-38 lacked a radio, which often left the crew unable to communicate with HQ or even other nearby units. By the time of the German invasion many T-38s were transformed into dug-out pillboxes in fixed positions.

With the Red Army in a dire situation, it was apparent that the production could not meet the demands for the T-34 or KV, and instead, on July 20, 1941 – just a month after the invasion had begun – the USSR State Committee for Defense (GKO) adopted Resolution No. 222ss, which called for the manufacture of 10,000 light tanks. It designed in just over a week, and two prototypes were made – one as the T-30A and the other T30-B.

The T-30A resulted in the T-40 amphibious tank, with just 222 being produced, where these served up to the defense of Moscow in late 1941. The T-30B variation became the T-60 scout tank, and while designed to carry the 12.7mm machine gun this was upgraded to the 20mm TNSh cannon, and was seen to be on par with the German Panzer II tanks, which were being used mostly in a reconnaissance role by that stage of the Second World War.

In 1942 the T-60 was up-armored to improve its battlefield survivability, while disc pattern road wheels replaced the spoked wheels fitted to the Model 1941 version of the tank.

The T-60 features a crew of two, and had an operational range of 450km with a top speed of 44km/h. While it was easily outmatched by most German tanks and anti-tank weapons, the T-60 proved ideal for the mud and snow that was common to the Soviet and European winters. It was also light enough that it could traverse swampy areas.

Production slowed as the Soviet losses mounted, and just 6,292 T-60s were produced. By 1942 the T-60 was unable to take on enemy tanks opposing it, and plans to upgrade it further were abandoned following the arrival of the T-70 series of light tanks. However, the T-60 proved to be the right tank at just the right time to help fend off the Nazi invasion.