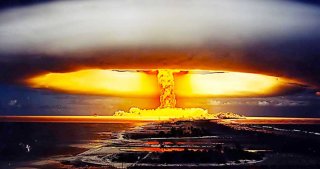 Key Point: The bomb also had a parachute to slow its drop, giving both planes time to fly about 30 miles from ground zero before the nuke detonated.

The Central Intelligence Agency blandly dubbed the test “Joe 111.” But a more popular name born out of Russian pride and a sheer awe sums it all up —theTsar Bomba, or “the King of Bombs.”

The bomb also had a parachute to slow its drop, giving both planes time to fly about 30 miles from ground zero before the nuke detonated. This gave Durnovtsev and his comrades a chance to escape.

The five-mile wide fireball reached as high in the sky as the Bear bomber. The shock wave caused the Bear to drop more than half a mile in altitude before Durnovtsev regained control of his aircraft.

Its mushroom cloud boiled up into the atmosphere until it was 45 miles above ground zero — essentially, on the lower boundaries of space. The top of the mushroom cloud spread out until it was 60 miles wide. The nuke’s thermal pulse burned the paint off of both planes.

The reason was accuracy. Or rather, the lack thereof. Because of the NATO alliance’s nuclear advantages, the U.S. could place bombers and intermediate range ballistic missiles fairly close to Soviet targets in Eastern Europe.

By the late 1950s and early 1960s, the U.S. placed intermediate-range ballistic missiles such as the Thor in the United Kingdom and Turkey, and Honest John and Matador missiles in West Germany.

Consider the damage a 100-megaton version of the Tsar Bomba could inflict on Los Angeles — say, if detonated directly above the U.S. Bank Tower, the tallest building west of the Mississippi River.

As for Sakharov, his experience building and testing Tsar Bomba changed his life, prompting him to abandon weapons research.

This piece was first featured in August 2015 and is being republished due to reader interest.