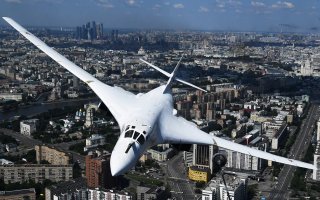 Frequent business travels have experienced long flights, and currently the world’s longest flight—between Singapore and Newark—can be up to eighteen hours and forty-five minutes. For those in business or first class that might still be a grueling amount of time to be stuck on an airplane, but this month the crews of a pair of Russian Tu-160 supersonic bombers were on board their aircraft and in the air for more than a full day!

Together the two crews broke the record for the longest non-stop flight for that type of aircraft.

“Two crews of the Long-Range Aviation have set a new record for distance and duration on Tu-160 supersonic strategic missile-carrying bombers,” Lieutenant-General Sergey Kobylash, the Russian Aerospace Forces’ Long-Range Aviation Commander told reporters for the state media. “The pilots of the Russian Aerospace Forces were in the air for more than 25 hours, covering a distance of more than 20,000 kilometers.”

The Russian Defense Ministry said the two Tu-160 bombers, which were commanded by Major-General Oleg Pchela and Lieutenant Colonel Sergei Volkovitsky respectively, took off and landed at Engels Air Force Base outside of Saratov. The base, which is solely operating location for Tu-160 aircraft, is named after the Communist philosopher Friedrich Engels.

During the twenty-five hour flight, the aircraft flew over the neutral waters of the central part of the Arctic and Pacific Oceans as well as the Kara, Laptev, East Siberia, Chukchi, and Barents Seas. The aircraft were refueled mid-air three times from six IL-78 tankers.

“The Tu-160 strategic missile-carrying bombers were accompanied by Su-35S fighter jets along with foreign aircraft along certain sections of their route,” the defense ministry added, and the flight was conducted in strict compliance with international airspace rules.

The previous record was set in 2010 by Tu-160 bombers that had been in the air for twenty-four hours twenty-four minutes.

While this set the record for the longest flight of the Tu-160 bombers, and is still an impressive achievement, the Russian Aerospace Forces would have to log another eight hours to reach the thirty-three hour-long duration mission time that many B-2 Spirit bomber pilots have had to make.

And even those flights are still far shorter than that made by six B-2 bomber in October 2001 after the 9/11 terrorist attacks. The six aircraft took off from Whiteman Air Force Base in Missouri and took part in a bombing mission as part of Operation Enduring Freedom—flying for more than forty-four hours before finally landing at Diego Garcia in the Indian Ocean.

What is also remarkable is that the epic flights were accomplished with a crew of just two.

Unlike the B-52, which is flown by a five-person crew that includes two pilots, two navigators and one electronic warfare officer—the B-2 has a crew of just two pilots who share all the tasks.