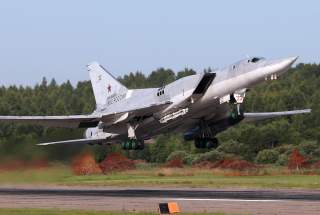 Russia’s much-feared Tupolev Tu-22M3 Backfire is getting a new upgrade and is adding a new long-range supersonic missile called the Kh-32. The upgrade will allow the massive jet to once again hit allied targets across the North Atlantic region just as the Backfire once did during the Cold War. The bomber and its new weapon will be delivered to the Russian Aerospace Forces in October.

“According to the existing plan, the first Tu-22M3M with the most advanced Kh-32 long-range cruise missile will go on combat duty in long-range aviation in October this year," a Russian defense industry source told the state-owned TASS news agency.

The addition of the powerful Kh-32—an advanced derivative of the Cold War-era Raduga Kh-22 or AS-4 Kitchen—gives the upgraded Tu-22M3 a formidable strike capability not just against ships, but against all manner of strategic targets in Europe. While the massive Kh-22 was designed to destroy American aircraft carriers, the new Kh-32 seems to be designed to hit a wider range of targets including bridges, military bases, electric power plants and other large installations at standoff distances.

While the Russians describe the Kh-32 as long-range supersonic cruise missile, the weapon has many of the characteristics on an aero-ballistic missile. Powered by a liquid-fuel rocket motor, the missile is designed to climb to above 130,000ft before diving towards its target. According to Russian sources, the Kh-32 has speed about Mach 5 and has range of over 1000 kilometers or roughly 600 miles. It is guided by a combination of inertial guidance/GLONASS and active radar.

Meanwhile, Russia is upgrading the long-serving Tu-22M3 fleet. The Russians are expected to modernize 20 to 30 Tu-22M3 of their remaining Backfires into the new Tu-22M3M configuration, which will include new build Kuznetsov NK-25 turbofans—rated at 50,000 pounds of afterburning thrust—that have a full service life. Additionally, the modernized bombers will receive new avionics—similar to those found on the Tupolev Tu-160M2 Blackjack—and feature a broader range of weapons.

It is likely that the Tu-22M3 will eventually be phased out of service. With Russia resuming production of the much more capable Tu-160M2 strategic bomber, fifty of those aircraft provides far better long-range capability against both strategic land targets than the Backfire ever could. Moreover, with the introduction of the very capable Sukhoi Su-34—with its advanced avionics and arsenal of standoff weapons—the Fullback can strike at most European targets with ease. Thus, the role of the Backfire is a relatively limited niche—which could explain why only about half of the remaining fleet is being modernized.

And for that niche—long-range strikes against maritime targets—there are few platforms better than the Tu-22M3. During the Cold War, the Backfire and its arsenal of missiles was the bane of the United States Navy. The U.S. Navy developed an elaborate Outer Air Battle doctrine using the Grumman F-14 Tomcat and its Phoenix missile along with the Aegis cruiser and destroyers in the hope that they could counter the Soviet Union’s aerial armada of Tu-22M3s.

While the Russian Federation’s Tu-22M3 fleet is a small fraction of the force that the Soviet Union once possessed, with their upgraded weapons and sensors, today’s Backfire is just as much a threat—albeit on a much smaller scale. The problem is further compounded by the fact that the United States Navy no longer flies the Tomcat and has allowed much of its air interception capability to atrophy. As such, even the modest Russian maritime strike capability could pose a real danger to the Navy’s carrier battle group given the capabilities of the Kh-32—especially given its speed and maneuverability.

The U.S. Navy does have the ability to defend its carriers from even the modernized Backfire and the Kh-32 with its Boeing F/A-18E/F and its Aegis cruisers and destroyers, however, the service would likely would not be able to count on intercepting the Backfire before its launches its missiles given the Super Hornet’s lack of speed. However, the AIM-120D AMRAAM and the ship launched SM-6 are excellent missiles, which should hopefully be enough to handle the Kh-32 if it does come to war. However, the problem is not the Backfire—China is developing similar capabilities in the Pacific. Ultimately, the United States Navy will need to develop a fighter capable of defending the carrier in the 2030s.

The bomber threat, which had been dormant for the past quarter of a century, is back.