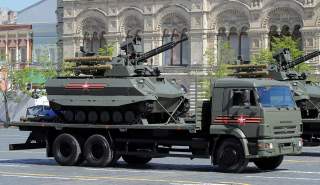 The Uran-9 unmanned ground vehicle, bristling with anti-tank missiles and all manner of high-caliber machine guns, was supposed to be a revolutionary combat asset for the Russian Ministry of Defense ever since officials confirmed the powerful robot tank saw testing in war-torn Syria back in March. As it turns out, rumors of its effectiveness have been greatly exaggerated.

In a surprisingly candid admission, Russian defense researcher Andrei P. Anisimov revealed several critical deficiencies in the Uran-9’s performance during its Syria tests at a Russian security conference in April—deficiencies that indicate, as Defence Blog put it, that the much-hyped robot tank “is not capable of performing the tasks assigned to it.”

How not capable is the Uran-9? Let’s take a gander:

- Instead of an operational range of some 1.8 miles (or 2,800 meters), Anisimov claimed that the consistently sustainable range was just a mere three hundred to five hundred meters “in the conditions of the settlement with low-rise buildings,” per Defense Blog—meaning that the Uran-9 is more of a patrol cop than a suitable ground combat vehicle.

- During the Syria tests, Russian defense officials recorded “17 cases of short-term (up to 1 min) and 2 cases of long (up to 1.5 hours) loss of Uran-9 control,” as Defence Blog put it. It’s unclear what “loss of control” means in this context, but it implies that the robot tank simply stopped working while downrange rather than, say, ran amok like the ED-209 in RoboCop. And this is to say nothing of the  thirty millimeters 2A72 autocannon that experienced frequent operational delays.

- Like most new military tech, the Uran-9 breaks down like it’s nobody’s business—and not just the mechanical elements like the guiding rollers and suspension. According to Defence Blog, the “electro-optical” station that governs the vehicle’s target ID functions has a limit range of just two kilometers. According to Defense Blog, the optical station “does not allow detecting optical observation and targeting devices of the enemy and gives out multiple interferences on the ground and in the airspace in the surveillance sector.”

Frankly, theses issues are unsurprising. As military researcher Sam Bendett observed for the U.S. Army’s Training and Doctrine Command, a May testing video of the Uran-9 in action likely hinted at some of the issues that cropped up during the downrange tests in Syria. But more importantly, the Uran-9’s failures can still prove instrumental and instructive for other unmanned ground vehicles—like, say, the Kalashnikov-produced BAS-01G Soratnik, or what T&P likes to call “Death Cab for Putin.”