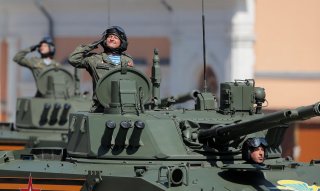 At this year’s Victory Day parade commemorating the 75th anniversary of the Soviet victory over Nazi Germany, a slew of new military hardware showcased the modernization of the Russian army. More than a show of military might, however, the parade is a forceful affirmation that the Soviet wartime victory has become a core pillar of contemporary Russian political culture.

Slated for last month, the 2020 Moscow parade was pushed back to June 24 amid coronavirus concerns—that makes this year’s celebration one of only two parades not to be held on the traditionally designated date of May 9, with the other being the original 1945 parade.

A cavalcade of new combat vehicles stood as the technical highlight of this year’s parade. The T-90M main battle tank (MBT) made its first parade outing after completing state trials earlier this year. The T90M is the latest iteration of the prolific 1992 T90 MBT, boasting the same 2А82-1М 125mm smoothbore gun as the T-14 Armata tank and upgraded “Relikt” explosive reactive armor. Also making an appearance was a procession of modernized infantry fighting vehicles (IFVs). These included the Kurganets IFV mounted with a new remote-controlled 30mm Epokha turret, an advanced variant of the T-15 with a new 220M Baikal mounted weapons system, and the BMP-2M “Berezhok” successor to the Soviet BMP-2 with sensor and weapons tracking improvements.

In keeping with the Moscow parades of the past several years, a diverse cast of air defense systems rolled through the Red Square. The 2008 Pantsir S1 short to medium range missile defense system was accompanied by two new variants: the Pantsir SA, adapted for use in the Arctic region, and the Pantsir SM with improved engagement range as well as a better targeting module. The S-350 “Vityaz,” a medium range surface-to-air system designed to phase out several older variants of the Soviet S-300, was prominently featured alongside the S-400 “Triumf” long-range missile defense system. The parade’s mechanized column consisted of a total 218 pieces of hardware, thirty-eight of which were historical equipment like the WWII-era T-34 Soviet medium tank.

The air flypast column, conspicuously missing from last year’s parade due to adverse weather conditions, returned in full force. In a nod to the victory’s 75th anniversary, a total of 75 aircraft—fifty planes and twenty-five helicopters—took part in the flypast. A squadron of four Su-57’s took to the skies over the Kremlin, in what is the second Victory Day outing for Russia’s flagship fifth-generation air superiority fighter. They were preceded by a group of MiG-31K fighters carrying Kh-47M2 “Kinzhal” nuclear-capable ballistic missiles, one of six new weapons unveiled during Russian President Vladimir Putin’s 2018 state-of-the-union address.

Victory Day has been a central Soviet—and now Russian—holiday since 1945, but the Soviet victory over Nazism has become a particularly crucial waypoint in Russian politics and culture over the past decade. “It is impossible even to imagine what the world would be if the Red Army hadn't come to defend it,” said Putin during his Victory Day address. Putin added that Soviet soldiers “freed European countries from invaders, put an end to the terrible tragedy of the Holocaust, saved the German people from Nazism, from its deadly ideology… it is our duty to remember this.” Earlier this month, Vladimir Putin wrote a six-page essay for The National Interest that dealt extensively in the ongoing contemporary conflicts surrounding Russia’s historical memory of WWII.