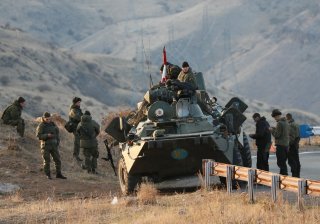 Fears of war have circulated and various international organizations have met in the hopes of finding a solution to the brewing crisis on the border of Ukraine. Russia has maintained more than one hundred thousand troops in the vicinity of the country’s border with Ukraine, and Ukrainian troops have been mobilized on the opposite side.

American intelligence officials have warned that Russian president Vladimir Putin could invade Ukraine by early 2022, according to a report by the Associated Press. Sources estimated that 175,000 troops would be deployed for such an operation; the current Russian buildup numbers roughly 120,000.

The path forward for the Kremlin remains unclear though. While a withdrawal by Putin would appear to be a capitulation to Western demands, a Russian invasion of Ukraine would come with significant risks for Russia. If such an invasion occurred, it would be the first invasion of a European country by any other since the 2008 Russo-Georgian War. Even without direct U.S. or NATO involvement, the Ukrainian military is far better armed and prepared today than it was in 2014 when Russia sent its troops into Ukraine’s eastern Donbass region to support pro-Russian rebels and occupy the Crimean Peninsula.

In 2014, as the conflict began in Donbass, Ukraine supplemented its forces with militias. Many of these militias had ties to private oligarchs and neo-Nazi groups. In the years since that time, U.S. aid, including lethal aid supplied during the Trump administration, has modernized the Ukrainian military. Meanwhile, the strength of Russia’s military remains unclear. Military risks aside, the invasion would certainly come alongside American and European economic sanctions on Russia, damaging the country’s already-tenuous economy.

Consequently, the Kremlin has appeared to chart a middle course, demanding concessions in exchange for its withdrawal. On Friday, the Kremlin claimed that Putin had sought security guarantees from President Joe Biden and NATO, insisting that Ukraine would not be allowed to join the defense pact in order to preserve Russia’s security.

However, this demand has generally been regarded as a “non-starter.” When asked about Putin’s condition, President Joe Biden indicated that he would not “accept anyone’s red line” with regard to NATO membership. Biden also pledged that it would be “very, very difficult” for Russia to invade Ukraine if Kiev received support from the United States.

“We’ve been aware of Russia’s actions for a long time, and my expectation is we’re going to have a long discussion with Putin,” Biden told reporters.

Biden and Putin are expected to hold a video conversation in the near future, seeking a cooperative way to end the border tensions.