Ruth Bader Ginsburg Back From Hospital 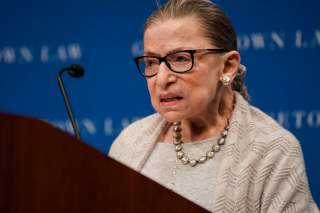 The 86-year-old justice was admitted to Johns Hopkins Hospital in Baltimore, Maryland, for evaluation and treatment of possible infections, according to a Saturday night statement from the high court. A Court spokesperson said Sunday that Ginsburg is “home and doing well.”

Saturday’s hospitalization is the latest in a series of health problems Ginsburg has had to manage in the past 12 months. Those trials began in November 2018, when she fell in her chambers at the high court and fractured three ribs.

She also missed oral arguments Nov. 13 due to illness.

The justices will not hear cases again until Monday, Dec. 2, providing sufficient time for Ginsburg’s recovery. The high court’s December sitting featured the first Second Amendment case the justices have considered in nearly a decade.