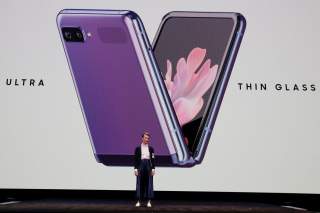 Samsung has kicked off its first Unpacked event of 2020 with a bevy of much-anticipated mobile releases, including a new foldable phone and the next generation of its flagship Galaxy series.

The Z-Flip marks Samsung’s second foray into the foldable phone market, preceded by last year’s Galaxy Fold. The Fold was bedeviled by design problems that led Samsung to recall all reviewer models, but the Z-Flip is a radically different take on the folding phone concept.

Folding vertically rather than horizontally, the Z-Flip boasts a redesigned “fiber shield” hinge that lets the phone’s lower half act as an impromptu kickstand. When set at an angle, the lower half of the display serves as a split-screen for supported apps--you can view a YouTube video on the top half while reading comments on the lower half, for instance.

Replacing Samsung’s excellent always-on-display functionality is a tiny screen on the outer shell that shows useful information like messages and missed phone calls. Its unorthodox form factor notwithstanding, the Z-Flip is no slouch in the traditional specs department, boasting a 6.7'' FHD+ AMOLED Display, 8GB RAM, 256GB internal storage, 3300 mAh battery, and a dual rear camera setup with ultra-wide as well as wide-angle functionality. The phone, available on February 14, will come in Samsung’s mirror black, gold, or purple finishes. The Z-Flip’s flagship features and ingenious folding design won’t come cheap, however, at a prodigious price tag of $1,380.

The star of the show was unsurprisingly the new Galaxy S20 lineup, jam-packed with best-in-class features that reaffirm the Galaxy series’ well-earned place as the most impressive Android hardware on the market. The S20’s all-new camera systems were covered at length, and for good reason: whereas competing phones have relied heavily on software tricks to drive image quality improvements, Samsung is unabashadley throwing hardware at the problem with a 64 telephoto megapixel camera.

This year’s Galaxy lineup includes three phones in the $1000-1400 range: the S20 for $999, S20 Plus for $1199, and S20 Ultra for $1399.  The noticeable price bump from last year’s lineup stems partly from the fact that the S20 features cutting edge network capabilities with 5G connectivity (keep in mind that you’ll also need a compatible network plan to take advantage of 5g speeds).  The only significant difference in outward design lies in screen size; though all three phones feature the same AMOLED display technology, the S20’s display is 6.2 inches as compared with the 6.7-inch and 6.9-inch displays of the S20 Plus and S20 Ultra respectively.

The exhaustive list of all specifications differences between the S20 models is available here, but suffice it to say that there is a clear sense of hardware progression from the baseline entry to the top-end model. The entry-level S20 is no slouch with a more-than-respectable 12GB of RAM, 128GB of storage, 4000 mAh battery, and impressive array of camera sensors, but the S20 Ultra brings whole new tier of performance with up to 16 GB of RAM, 512GB of storage, 5000 mAh battery, a whopping 108-megapixel wide-angle camera, and 40-megapixel selfie camera that could be a welcome addition for certain kinds of bloggers and creative professionals. The S20 Plus is shaping up to be a solid compromise for users who want a bigger screen and more storage options than what the S20 offers, but don’t need the S20 Ultra’s better camera.

More in-depth testing and performance numbers will emerge as the review embargo gets lifted in the coming weeks, but one thing is clear from the S20 reveal: this year’s Apple flagships are up against stiff competition in the premium smartphone category.