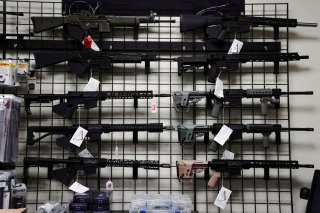 High Bridge Arms, which closed in the fall of 2015, was the last gun shop to operate in San Francisco. Its closure was part of what supporters of the Second Amendment said was an effort to make the City by the Bay a "gun-free zone," and now nearly six years later San Francisco's chief prosecutor is looking to take it even further.

This month District Attorney Chesa Boudin announced the city is suing three California companies that make and distribute so-called "Ghost Guns," maintaining that the DIY firearms have been responsible for nearly half of the firearms recovered in gun-related killings in the city last year.

The suit names Blackhawk Manufacturing Group, GS Performance, and MDX Corp. – none of which are based in San Francisco, but are responsible for producing a large number of the firearms found in the city and across California, Boudin said during a news conference, as reported by the Associated Press.

"Guns are flooding our streets. Enough is enough," Boudin said. "It is not enough to wait until after someone has been shot and killed by a firearm. We must get to the root of the problem."

Defection for a Bigger Problem

Boudin's lawsuits were filed as he has faced criticism for his response to rising crime rates in San Francisco, and has cast blame on the guns—not criminals—for the city's woes.

"They are three separate manufacturers that are flooding our streets with illegal firearms, with firearms that we know are being used to harm, to maim, and to kill," added Boudin. "They're harming our communities. They're taking innocent lives. They're putting law enforcement officers at risk. And it's an epidemic that we know is disproportionately impacting communities of color."

The District Attourney (DA) has also called in support from gun control groups, most notably the Giffords Law Center to Prevent Gun Violence, to sue the three firearms manufacturers.

"They've made it possible for anyone in the state to buy all the parts needed to build an untraceable firearm, no questions asked, and get it shipped in a convenient package with tools and instructions, like a piece of IKEA furniture," Giffords Center lawyer Hannah Shearer told the California Globe.

The lawsuit calls for the companies to be barred from shipping their products in the Golden State, while it also seeks monetary penalties.

There is no denying that there has been a rise in the home-made guns showing up on San Francisco's streets—and according to reports, police had seized 164 of the so-called "ghost guns" in 2020, a 2,600 percent increase from the six confiscated in 2016.

Boudin has also noted that sixty-five percent of all ghost guns seized by the Bureau of Alcohol, Tobacco, Firearms, and Explosives (ATF) were in California—but it is unclear if all of those firearms were actually used in a crime.

The three companies named in the suit have said they are in full compliance with state and federal law. Moreover, the California Globe also reported that many anti-crime advocates have claimed that Boudin is simply trying to deflect blame with the lawsuit.

"Everyone tries to paint San Francisco as just being all for these left causes, but it isn't always the case," added Ali. "I've marched with Black Lives Matter and protested against Trump. I thought he was a fascist. So it should be telling that a lot of people like me are not blaming these gun makers who are following the rules. We're against Boudin. A lot of us are against Boudin."