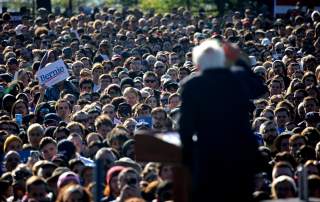 Sen. Bernie Sanders’s presidential campaign suggested Wednesday that the press is blacking out positive coverage of the Vermont senator.

“Are you familiar with this phenomenon?” Sanders’s campaign manager Faiz Shakir noted in an email to supporters before explaining the concept of a “Bernie Blackout.” He is running neck-and-neck with Democratic candidates Sen. Elizabeth Warren of Massachusetts and South Bend, Indiana, Mayor Pete Buttigieg.

“When a poll shows less than favorable news for our campaign, it’s national news. Non-stop. They show it on the screen and pundits talk gleefully about how the campaign is over,” the email continued.

Sanders’s campaign email continued: “But when a poll shows us winning in an early state, or like yesterday’s Emerson poll that showed us down 2 nationally to Biden and leading Warren by 4, there’s nary a peep.” The Democratic presidential candidate has made these complaints in the past.

Sanders told The Wall Street Journal in August that he believes corporate media outlets do not provide his campaign fair coverage.

“One would be very naive not to believe that the owners of the media have an agenda as well,” he said. “It’s not just their attacks on me, that’s not what I’m talking about. It’s the issues that they allow for serious discussion.”

Sanders said his barbs are different from President Donald Trump’s media criticisms. The president “says that the media produces fake news; I don’t believe that for a second. It’s disgusting, it undermines American democracy,” he told WSJ at the time.