Satellites Could Help Solve Our Planet From the Climate Crisis 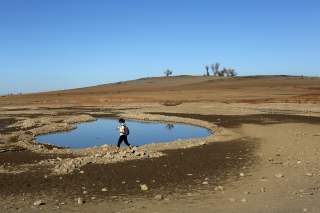 Today, more than 700 million people around the world drink water from unsafe or untreated sources, such as wells, springs and surface water.

About half of these people live in sub-Saharan Africa. In fact, in more than 30 African countries, fewer than 20% of the people have access to safe drinking water.

Climate change is likely to worsen the situation by making water less available in some locations and by changing the amounts and timing when water is available.

Determining whether a region has sufficient water to satisfy the needs of people who live there is a complicated and imperfect process. Our research team has developed a new approach to measure water scarcityby using satellites hundreds of miles in space.

How to measure water scarcity

To estimate water scarcity, hydrologists, the people who study the science of water, build what they call a “water budget.”

By dividing the available water by the population in the region, hydrologists can tell whether there is sufficient water to meet people’s needs.

Generally, in the U.S., the average person uses between 300 and 400 liters of water per day for basic needs – like drinking, sanitation, bathing and food preparation.

Globally, a country is said to experience a serious water scarcity problem if it has less than 500,000 liters of water per person per year, to meet both their daily needs and agricultural needs.

This water budget process works if accurate data are available for each source of water. However, in many developing regions, such as Africa, the data required to calculate water budgets are not available.

Yet Africa critically needs accurate information on its water scarcity status. As the second most populated continent, Africa is projected to have a population of 2.4 billion by 2050, approximately double the current estimated population. Such rapid population growth will exert considerable stress on the continent’s available water resources, worsening the already acute water scarcity situation.

So, assessing the potentially available water resources is essential for the future.

Look to the skies

Our study takes a new approach to assessing water scarcity.

We used data from two satellite systems. The first is called the Tropical Rainfall Measuring Mission, operated since 1997 by the U.S. and Japan. The Tropical Rainfall Measuring Mission uses several instruments – including a precipitation radar, microwave imager, visible and infrared scanner – to estimate rainfall. Getting the rainfall estimate right is critical, because this is the most important source of water for human use.

The second type of satellite data is from the Gravity Recovery and Climate Experiment, a joint mission between the U.S. and Germany. First launched in 2002, the Gravity Recovery and Climate Experiment is a twin satellite mission that uses the changes in the Earth’s gravitational fields to infer changes in the global water resources, from the Earth’s surface to the deepest groundwater aquifers.

We combined data from these two satellite systems to calculate the monthly potential available water from all sources of water for each country in Africa from 2002 to 2016. By dividing this value by the population in each country, we obtained a new measurement of available water storage per capita.

Because the Gravity Recovery and Climate Experiment satellite data also estimates water in deep groundwater aquifers, which may not be accessible due to technical or economic limitations, we refer to this new estimate as potential available water storage.

We compared our results with the data currently used by the United Nations Food and Agricultural Organization. Their method relies on conventional water budget accounting to estimate the total renewable water resources in a country. It then classifies each country into one of four categories: water-sufficient, vulnerable, water-stressed or water-scarce.

Of the 48 African countries studied, our method classified 26 in the same category as the U.N.‘s method; 12 were classified as having more water than indicated and 10 as less.

These differences are not surprising. Our estimate includes also water in aquifers deep underground that the U.N.’s method does not account for. Their method likely underestimates the total available water for countries that have substantial groundwater reserves.

By 2050, assuming no change in available water resources, we project that 19 countries in Africa will face water scarcity and another nine countries will be water-stressed. However, if climate change were to cause Africa’s water resources to decrease by 10%, which is within the range of several climate projections for some African countries, then approximately 85% of Africa’s population will experience a dangerous water scarcity situation.

In general, we think that our method has several advantages over existing methods. It circumvents many of the limitations related to data unavailability and reliability in Africa. The data are more temporally and spatially continuous, as well as easier for researchers to access. As a result, estimates of water scarcity can be carried out much more rapidly for the entire continent.

Satellites will gather new data in the coming years. We plan to take advantage of such data improvements as they become available to refine our method in terms of accuracy and water scarcity assessment at the sub-country level, not only in Africa but globally.

This article by Emad Hasan and Aondover Tarhule originally appeared at The Conversation.

Emad Hasan is a Postdoctoral Researcher in Geography at Binghamton University, State University of New York.

Aondover Tarhule is Vice Provost and Dean of the Graduate School at Binghamton University, State University of New York.