Saudi Arabia Is Changing Its Face, One Textbook at a Time 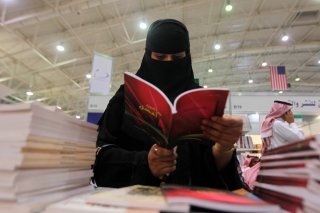 The reformist agenda heralded by the Saudi government has been a feature of discussion about the country over the last few years. The Vision 2030 program, launched in 2016, has been the cornerstone of the modernizing and reformist policies that Saudi leaders have been eager to implement in the kingdom. The desired changes are primarily economic: a reduction of oil dependency, a diversification of the economy, and the increasing of Saudi workforce participation. However, the importance of the social and cultural aspects of these reforms has become increasingly relevant, as this vision of a new Saudi Arabia requires not just changes to its industries, but to its ideas.

Recent reports from The Institute for Monitoring Peace and Tolerance in School Education (IMPACT-se) have highlighted these shifts in a crucial area, that of education policy. The reports, one from 2021 and another from 2020, have focused on Saudi textbooks, finding that a dramatic leap forward has been documented along the moderating path and that, “the trajectory has become … well-defined, encompassing the entire curriculum.” The presence of fundamentalist material that incited violence has long been noted, with the 2020 IMPACT-se study pointing out how in textbooks between 1999 and 2002, “Christians and Jews were denounced as infidels and enemies of Muslims and Islam.” In spite of changes following the 9/11 attacks and the realization that this curriculum may have played a role in the radicalization of many of the Saudi-national hijackers, “the themes of intolerance and hostility remained.”

The past few years, however, have seen reforms to curricula grow in pace and depth. IMPACT-se has noted that since December 2020, at least “twenty-two anti-Christian and antisemitic lessons were either removed or altered. The same can be said for five lessons about infidels and polytheists. An entire textbook unit on violent jihad to spread Islam and protect Muslim lands—which had previously detailed circumstances to justify jihad while praising it as an act of piety—was removed.” Passages advocating the death penalty for the “crime of sodomy” and apostasy have also been removed in recent years.

These changes cannot be considered outside of the broader vision for Saudi Arabia’s future, in particular, because the kingdom hopes to open up for tourism and to offer itself as an attractive base for Western companies. The link between these economic aims and the cultural changes fomented by education reform has been argued by IMPACT-se. “Rigidity and hate for the other will not serve to unlock the potential of a nation, while respect for others is key to prosperity and security, opening doors of trade and cooperation and allowing the free flow of ideas and resources.”

In spite of the economic forces driving this shift, the impact of these reforms and changes to Saudi society should not be underestimated. The changes are far from cosmetic, and just as much as the criticism levied at the kingdom for its past extremism was valid, so is the praise that stems from these changes. The Saudi Arabia that raised its children on Wahhabi fundamentalism could be giving way to a new generation of Saudis who will grow up with an education more tolerant and respectful for those both inside the kingdom and in the wider world than ever.

Indeed, these changes reflect a much broader willingness to engage with groups outside of the narrowly defined spectrum of acceptability by Wahhabi standards. Though the external pressures cannot be excluded from the account of why these reforms are taking place, a process of genuine internal maturation does seem to be equally, if not more, the cause of these processes.

Of course, “problematic content persists in Saudi textbooks in many important areas.” Issues around gender, religious intolerance, and dubious historical claims remain causes for concern. But while the urge for a total overhaul of a country’s textbooks in an instant is tempting, it’s not always achievable: curriculum reform can take time.

Nevertheless, the Saudi educational curriculum appears to be sailing on an even keel toward its stated goals of more moderation and openness. These changes seem to reflect the maturation of an inner process, and not just a reluctant response to pressure from the outside or urgent security needs.

We should be bullish about the impact of these reforms, both in how these developments shape Saudi Arabia, and the wider region. Following years of war in Yemen and episodes of internal turmoil, and in the context of the wider troubles the region has seen in the last decade, this path offers some cause for careful optimism.

School education is the key to fostering the development of peaceful, tolerant societies. But it’s also where negative influences, like skewed historical narratives, hatreds of the other, gender inequalities, and political violence, take root. For decades, school textbooks in Saudi Arabia incited generations to view outsiders as enemies. A policy of continued textbook improvement can break this cycle and ensure the next generation is educated for peace, coexistence, religious tolerance, and a shared future.

Marcus Sheff is the CEO of The Institute for Monitoring Peace and Tolerance in School Education (IMPACT-se). He held positions as a political reporter at The Nation as well as an editor at The Jerusalem Post. He also previously held positions at Dow Jones International, Advanstar Inc., and The Israel project. He has briefed world leaders, spoken at the United Nations and parliaments, and appears regularly in media.