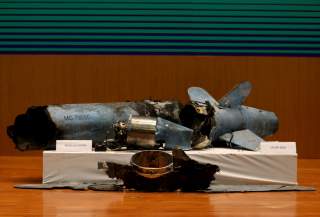 It also shocked the world that the targets were hit so easily and accurately, apparently by drones and cruise missiles that the U.S. and Saudis claim were fired by Iran or its proxies. Seventeen targets were struck in a coordinated and carefully planned volley.

The attacks came despite the Saudis spending a fortune to acquire advanced arms, including U.S. Patriot air defense missiles and early warning radar. Which raises another question:

How vulnerable is the U.S. homeland to such an attack?

“A strike on a soft target in the homeland critical to national infrastructure; military assets out of place to provide an effective defense; and specific attribution not immediately available,” writes Lt. Col. M.L. Cavanaugh, a senior fellow with the U.S. Army’s Modern War Institute at West Point. “Those features should stir some profound questions about homeland defense as well as the classical models of deterrence US planners have relied on for decades as the foundation of American national security.”

Cavanaugh argues that the old traditional model of deterrence is over. That model relied on two pillars: oceans that both shielded the United States from attack and allowed it fight America’s wars on foreign soil, and the threat of massive nuclear retaliation.

Those pillars have crumbled, according to Cavanaugh. “First, devastating weaponry has become so cheap that North Korea, with roughly the same economic activity as the Colorado Springs region (around $30 billion), possesses the ability to threaten American cities with strategic strikes. In part, this cheapness has enabled the spread of immense destructive power. Not only do several more potentially hostile countries possess nuclear weapons today (in what’s been called the ‘second nuclear age’), more than thirty countries possess ballistic missile capability. And with Pandora’s deadly box open, tomorrow there will surely be more.”

Then there are new methods of warfare that cannot be deterred with nuclear weapons. “Even more worrisome is the exponential growth in cyber-weapons, which seem immune to classic deterrence, as they transcend geography and can cause equal chaos in the next cubicle or on the next continent,” Cavanaugh writes. “Also, economically and strategically, the critical infrastructure that underpins the Information Age comes with built-in vulnerabilities owing to its relatively exposed locations up in space and under the sea. There are simply more targets than ever before, with hundreds of ways to harm another homeland.”

Cavanaugh believes that the best homeland defense is a forward defense. “First, it’s very likely that the best lessons about potential Russian attacks on the American homeland can be learned in places like Ukraine—and even Salisbury, United Kingdom—(via US European Command), as Russia has turned those European cities and countries into homeland-hitting modern war labs. Second, US European Command would gain immeasurably by being tied more intimately to homeland defense because it is clear that Russia intends to use new technologies (particularly non-nuclear) to achieve Russian regional objectives by inducing strategic stalemate that holds America’s global power projection at bay.”

Interestingly, despite tensions over issues like immigration, Cavanaugh suggests protecting the United States with a defense partnership with Mexico. “When NORAD first came together in the late-1950s, the option to include Mexico in some capacity was considered (which is partly why the NORAD crest prominently includes Mexico), yet, diplomatic difficulties stopped this short of fulfillment,” he writes. “Nonetheless, the logic of Mexico’s merit to NORAD endures: Mexico would provide strategic depth to the south in exchange for American and Canadian defense resources and support (in the same way these benefits work with Canada to the north). Over the long haul, Mexico is poised to become a G7 country by mid-century, with an economy larger than those of Japan, Germany, and the United Kingdom. Moreover, while the Russians have probed the far north for decades and decades, it seems distinctly likely going forward that they could also aim to disrupt and threaten via an indirect, southern approach through countries like Cuba and Venezuela.”