Scary Fact: The Air Force Only Has 6 Working B-1B Bombers 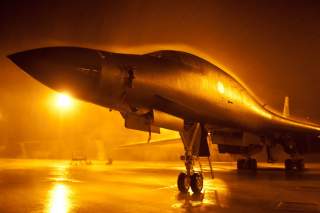 At the Senate confirmation hearing for Gen. John Hyten on Jul. 30, 2019 it was disclosed that the U.S. Air Force has only six fully mission-capable B-1B bombers.

The B-1 fleet is in the midst of an intensive slate of maintenance work and upgrades. Of the 61 jets, 15 are in depot maintenance and 39 aircraft are down for inspections or other issues, Sen. Mike Rounds, a South Dakota senator, said during the hearing.

As reported by Air Force Magazine, in response, Hyten implored lawmakers to provide B-1 maintenance funding to reverse the fleet’s problems.

The House Armed Services seapower and projection forces subcommittee hinted at the issue in legislation earlier this year. House lawmakers asked the U.S. Air Force (USAF) to report back with a readiness recovery plan for the conventionally armed bomber. Long known as a workhorse overseas, the B-1s were grounded for nearly four weeks this spring due to issues with an ejection seat.

According to the subcommittee’s version of the 2020 defense policy bill, Senators want the Air Force to take more responsibility for solving the problems. “The committee is concerned B-1 readiness does not have the priority and resources to improve B-1 mission-capable rates,” the report states. “This is evidenced by fully mission-capable aircraft currently in single digits and aircrew being rerouted from flying the B-1 to other aircraft due to lack of B-1 aircraft for training.”

The Air Force also grounded B-1s in June 2018, after the wing of an aircraft from Dyess AFB, Tex., caught fire during training—and the ejection seat would not budge.

Gen. Timothy Ray, head of Air Force Global Strike Command, has acknowledged B-1 inspections as necessary for the aging fleet despite affecting readiness. The Boeing-built B-1s entered service in the 1980s, but didn’t fly their  first combat mission until 1998. Since then, however, it’s been a workhorse.

“It’s not a young airplane,” Ray said. “Wear and tear is part of the things we find.”