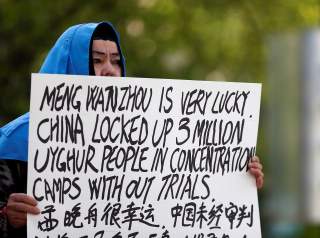 If you’re Muslim living in China today, turning down alcohol, refusing to smoke, or wearing a beard could be treated as a crime.

To date, China’s internment camps, which they call “re-education camps,” contain over 1 million Uighurs, who are a minority group made up of mostly Muslims living in the autonomous regions of Xinjiang and Tibet.

They have long been in conflict with the Chinese Communist Party, whose camps are operated with the end goal of Sinicizing religious beliefs, or making them conform to the party’s ideology.

The Heritage Foundation held an event last week titled “The Crisis in Xinjiang” to discuss the injustice being perpetrated by the Chinese Communist Party and why those who treasure religious freedom should care.

Olivia Enos, a foreign policy analyst for the Institute for National Security and Foreign Policy at The Heritage Foundation, said Uighurs who visibly live out their religious life are the very reason the Chinese government deems them suspicious.

Their religious expressions act as cultural red flags to government authorities, Enos said, and for this reason, the current Uighur crisis in Xinjiang is a repetition of the Chinese Cultural Revolution of the 1960s and ’70s.

“I don’t think that I expected in my lifetime that I would be reading about elements of the Cultural Revolution essentially repeating themselves over again, but I think that that’s really where we’re at today,” Enos said during the event.

During the Cultural Revolution, roughly 4% of the urban population was interned by the Chinese government. Today in Xinjiang, she estimated as many as 15% of the population are being held inside these re-education facilities.

“This principled re-education didn’t just come about today. It’s something that has been a historical part of the Chinese government’s own thinking,” she said.

The Chinese Communist Party’s internment of Uighurs is more than cultural racism, said Enos: “It is essentially an attack on religious beliefs,” adding:

The Chinese Communist Party has essentially identified all forms of religion as extremism when they passed their regulations on religious affairs last year.

In particular, the Uighurs have been facing perhaps some of the most severe consequences of that decision to so-called Sinicise religion, which is China’s attempt to make religion conform with the Chinese Communist Party’s thinking.

Back in the Cultural Revolution, their primary objective was to rectify ‘wrong thinking,’ and—this comes from ‘The Black Book of Communism’—to make it so that it aligns with Marxism, Leninism, faith in Maoism and socialism, the Communist Party, and the democratic dictatorship of the people.

This is not unlike what we’re seeing happening with the Sinicization of all religion today.

Analysts have discovered at least nine different types of internment camps, said Adrian Zenz, a presenter who works as an independent lecturer on China ethnic policy and public recruitment in Tibet and Xinjiang. But according to his research of Chinese government documents, China admits to running just one kind of internment camp—a “re-education school.”

Zenz showed the audience a 3D map of a recreation of the inside of the “schools,” sent to him from an anonymous source.

The illustration showed women of all ages in classrooms, learning basic Chinese. The students were behind high metal fences to protect the teachers from any backlash from their students.

Nury Turkel, who spoke at the event as a U.S.-based Uighur activist, attorney, and former executive director of the Uyghur Human Rights Project, was born in a re-education camp. He said he believes the internment of Uighur Muslims in China is something Americans ought to take seriously.

“First of all, we need to acknowledge and recognize what is happening in China and China’s government’s attempt to exploit those methods, affect your democratic system, your rule of law, [and] free expression,” Turkel said.

“If you don’t address this, if you don’t recognize this, it’s going to be very difficult to come together to rectify this situation. And the way that we handle this, recognize this, eventually find a solution, defines in what kind of world do we want to live.”

Turkel went on to quote the Chinese Communist Party secretary:

‘These camps were designed to teach like a school, be managed like the military, and defended like a prison, with a specific purpose to break the Uighur lineage, break their roots, break their connection, and break their origin.’

Zenz agreed with Turkel, and explained that the Chinese Communist Party uses religious terms to promote the internment camps in an attempt to undermine and replace the religious values:

The narratives that we are seeing in Xinjiang are like salvation narratives.

One of the documents I came across in the last weeks literally talked about the detainees who go through the training and the camps and then being put to labor, are like—the term was they are [in the] process of being born again.

I looked it up, the exact same Chinese phrase as in John 3:6, when Jesus says we must be born again …

There’s a lot of copy-catting going on from religion. And of course communism seeks to replace religion.

It’s a very dedicated effort to change the core allegiance of what really people identify with first. The re-education camps are a really brutal fight over the human heart.

Former Kansas Gov. Sam Brownback spoke at the event as U.S. ambassador at large for international religious freedom. He emphasized that all religions have come under increasing attack from the Communist Party, not just the Uighurs, but did offer some hope.

“You may have some success on a near-term basis, but on a long-term basis, you’re attempting to control a religion and the soul of man,” Brownback said.

“No government has ever been successful doing this. You can push it back for a while, you can hold it down for a while, but just like a sapling that comes up through the sidewalk, it will be back.”

This article by Carmel Kookogey originally appeared at The Daily Signal. This article first appeared in 2019.