Schiff ‘Not Convinced’ On Impeachment: 2020 'Only Way’ To Remove Trump From Office 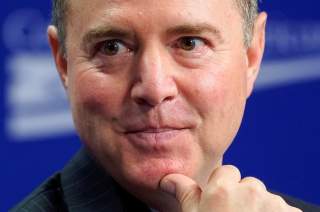 House Intelligence Committee Chairman Adam Schiff said Thursday that the only way President Donald Trump is leaving office is if he “gets voted” out in 2020.

Schiff’s comments came during a Thursday interview on CNN’s “New Day” after former special counsel Robert Mueller testified Wednesday before two congressional panels, including Schiff’s committee, on his investigation into Russian interference during the 2016 presidential election.

“We do need to be realistic, and that is, the only way he’s leaving office, at least at this point, is by being voted out, and I think our efforts need to be made in every respect to make sure we turn out our people,” Schiff said.

“Should we put the country through an impeachment? I haven’t been convinced yet that we should, and going through that kind of momentous and disruptive experience for the country, I think, is not something we go into lightly,” he added.

The California Democrat went on to say that Mueller turned the investigation into a criminal case “when he picked it up,” and the American people “still don’t know the full results of those counterintelligence leads.”

He added that he is “frustrated with the pace” of the investigation, which is “the whole reason why the Trump Administration is obstructing this way.”

“But I do think we need to understand that if we declare that we are now in the midst of an impeachment, it doesn’t bring McGhan in tomorrow. We still have to go to court to force his testimony,” Schiff said in reference to former White House lawyer Don McGahn.

“We are winning in the courts, but yes, it is frustrating. The president obstructed justice, and now he’s obstructing Congress. … I would be delighted if we had a prospect of removing him through impeachment, but we don’t,” the House Intelligence Committee chair concluded.

Schiff has spoken positively of impeachment proceedings in the past.

He said during a May interview with CBS’s “Face The Nation” that impeachment could provide “an additional tool … to get information for the American people. … We may follow with inherent contempt, and we may have to follow with impeachment.”

Schiff also pushed the narrative that because Mueller’s report did “not exonerate” Trump from being criminally charged with obstruction of justice.

“Mueller decided it wasn’t fair to say if Trump would’ve been indicted for obstruction if not for DOJ policy prohibiting it. Speaking as a former prosecutor, the case is clear: there’s more than enough evidence for charges. Hundreds of prosecutors agree,” Schiff tweeted on May 6.

On May 7, he tweeted, “Mitch McConnell says it’s ‘case closed,’ even though Mueller found substantial evidence Trump broke the law. That’s like saying the Watergate hearings should never have taken place. Or that crime doesn’t matter when committed by a president of your party. It matters.”

In 2018, he tweeted that Trump colluded with Russians: “… We did find evidence of collusion, despite GOP members being more interested in protecting you than learning the truth. When accusing others of lying, best not to misrepresent facts yourself.”

The California congressman’s talk of impeachment dates back to 2016 when he tweeted, “There’s no question the Emoluments Clause applies to POTUS – including Trump. Severe remedies if [it’s] violated, including impeachment.”