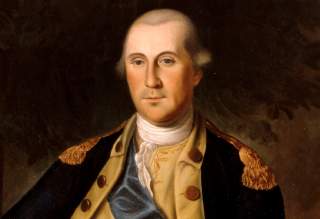 The San Francisco Board of Education unanimously voted last month in favor of painting over a George Washington mural series on a school wall depicting Washington standing over a Native American’s corpse and another in the company of slaves on his Mount Vernon estate.

“This is reparations,” Education Board Commissioner Mark Sanchez said in a KQED report when asked about the estimated $600,000 price tag for its removal. It could reportedly take a year to complete.

It was funded by the New Deal’s Works Progress Administration and shows a variety of scenes from Washington’s life.

School district spokeswoman Laura Dudnick confirmed that although only two mural pieces stand out as offensive to members of the community, the board’s decision would apply to all 13 panels of the mural.

School board members had to decide whether to cover and preserve the painting using panels or textile, or completely erase it by painting over it. Buckling under pressure from those who find the images offensive to certain members of the school community, the board decided to paint over it.

During a public comment portion of the June 25 meeting, Paloma Flores, program coordinator for the district’s Indian Education Program, said, per KQED, “It’s not a matter of offense, it’s a matter of the right to learn without a hostile environment.”

“Intent does not negate lived experience,” she added.

According to KQED, mural critics in the community “believe the artist’s intentions are irrelevant in light of the harm to young people of color daily confronted by images of their ancestors debased.”

“To portray a Native person face down, dead, you are trapping their soul so that they can not move on,” she said, per KQED.

One mural supporter says he plans to legally challenge the move to paint over the mural. Lope Yap Jr., vice president of the school’s alumni group, vowed to “use every tactic available” for litigation, according to KQED.

Before the school board meeting, the San Francisco Chronicle polled art leaders in the Bay Area about the controversy.

“I am deeply sensitive to the pain that this situation is causing the student body and Washington High School community,” said Neal Benezra, director of the San Francisco Museum of Modern Art.

“A decision to paint over the mural is irreversible,” he added. “The option to cover the artwork with panels to allow future educational research keeps open that opportunity.”

Jarrett Stepman of The Daily Signal wrote about the removal of the mural, citing a historian’s account of Arnautoff, “a man of the left in his own time,” and his intention of making Washington “less glamorized” by painting images of the slaves he owned or the price paid with Native Americans’ blood during westward expansion.

In his interview with historian Fergus M. Bordewich, Bordewich explains:

[Arnautoff] included those images not to glorify Washington, but rather to provoke a nuanced evaluation of his legacy. The scene with the dead Native American, for instance, calls attention to the price of ‘manifest destiny.’ Arnautoff’s murals also portray the slaves with humanity and the several live Indians as vigorous and manly.

Those who condemn the murals have misunderstood it, seeing only what they sought to find. They’ve also got their history seriously wrong. Washington did own slaves—124 men, women, and children—and oversaw many more who belonged to his wife’s family. But by his later years he had evolved into a proto-abolitionist, a remarkable ethical journey for a man of his time, place, and class.

The removal of the mural is expected to take at least a year, according to district staff. Before proceeding with painting over the mural, its historical significance requires an environmental review.

In the case that the painting takes more time than expected, the district could cover it with panels. Three years, Sanchez said, would be considered “undue delay.”