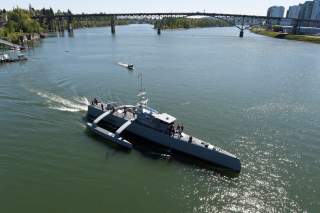 On January 30, the U.S Navy accepted the Anti-Submarine Warfare Continuous Trail Unmanned Vessel (ACTUV) from DARPA, the Pentagon’s premier technology-innovation agency. The Sea Hunter, as the first ship of the ACTUV program is called, is an unmanned ship primarily designed to track quiet diesel-electric submarines for months with little or no human help. DARPA has described the objective of the program as developing an “advance unmanned maritime system autonomy to enable independently deploying systems capable of missions spanning thousands of kilometers of range and months of endurance under a sparse remote supervisory control model.”

This included demonstrating the ship’s ability to follow all international maritime laws, and “the capability of the ACTUV system to use its unique characteristics to employ non-conventional sensor technologies that achieve robust continuous track of the quietest submarine targets over their entire operating envelope.” DARPA also noted that while the immediate goal was to improve antisubmarine warfare (ASW) tracking capabilities, “the core platform and autonomy technologies are broadly extendable to underpin a wide range of missions and configurations for future unmanned naval vessels.”

The resulting prototype is a 140-ton ship that is 132 feet long, making it the largest unmanned ship ever built. The ship can reportedly also reach speeds of twenty-seven knots. Further work on ACTUV, including building new ships, will be handled by the the Office of Naval Research (ONR), which became a partner on the program in 2014. DARPA itself began work on the program around 2010. Joint testing began in 2016.

“ONR will continue developing the revolutionary prototype vehicle—the first of what could ultimately become an entirely new class of ocean-going vessel able to traverse thousands of kilometers over open seas for months at a time, without a single crew member aboard—as the Medium Displacement Unmanned Surface Vehicle (MDUSV),” DARPA said in a statement announcing the transfer.

Although, as the name suggests, the ACTUV system’s main mission is expected to be ASW. DARPA and ONR also tested the ship on other missions by using different modular payloads. One particular interesting prospect is using the Sea Hunter and future ships to conduct mine-clearing missions, which wouldn’t require putting sailors’ lives at risk. According to DARPA, the prototype vessel completed tests using a mine countermeasures (MCM) payload in August 2017.

One DARPA official who worked on the ACTUV program noted that the ship represents something of a shift in philosophy for the U.S. Navy. “ACTUV represents a new vision of naval surface warfare that trades small numbers of very capable, high-value assets for large numbers of commoditized, simpler platforms that are more capable in the aggregate,” Fred Kennedy, the director of DARPA’s Tactical Technology Office, said. “The U.S. military has talked about the strategic importance of replacing ‘king’ and ‘queen’ pieces on the maritime chessboard with lots of ‘pawns,’ and ACTUV is a first step toward doing exactly that.”

Although begun before the Third Offset Strategy was unveiled, the ACTUV program certainly fits in with that effort. Former deputy secretary of defense Robert Work, who is often credited as the architect of the Third Offset, repeatedly stated that exploiting advances in artificial intelligence and autonomy would be central to the strategy’s success. He also stressed the potential for machine and human collaboration. While this may not be exactly what he had in mind, the program includes human-machine interaction, since the Sea Hunter only provides surveillance while other ships would be necessary to actually destroy an adversary submarine.

Competitive strategies like the first offset (tactical nuclear weapons) often employ cost-efficient systems. Here, too, the Sea Hunter fits the bill. As Franz-Stefan Gady notes at the Diplomat: “The Sea Hunter will approximately cost $15,000 to $20,000 per day to operate, whereas the average costs of operating a guided-missile destroyer with anti-submarine warfare capabilities are around $700,000 per day.”

Improving America’s ASW capability is a pressing need, given the proliferation in the number and sophistication of enemy submarines. China leads the way in this regard. According to some estimates, Beijing’s diesel-electric submarine fleet could grow from roughly fifty in 2016 to seventy-five in 2030. The sheer numbers don’t tell the whole story because Chinese submarines will also grow more advanced (and quieter) as Beijing retires aging vessels in favor of more modern ones. Russia is also making numerous advances in its undersea fleet after allowing its capabilities to atrophy following the Cold War.

The U.S. Navy could induct the first Sea Hunter into service as early as this year. In December 2017, the Navy awarded a $35.5 million contract to Leidos to begin working on the second ship, preliminary called the Sea Hunter II.

Zachary Keck (@ZacharyKeck) is a former managing editor of the National Interest. This article first appeared in 2018. It is being republished due to reader interest.