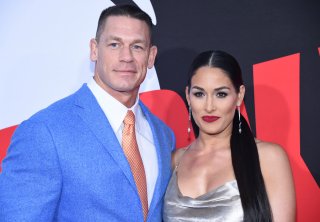 “I’m really sorry. You have to understand that I love and respect China,” John Cena pleaded in a video posted to Weibo, a Chinese social network. The hulking wrestler made the mistake of referring to Taiwan as a country while giving a promotional interview—a mistake that reduced all six feet, two hundred and fifty pounds of him to an apologetic kitten.

Cena joined a long list of American hotshots who have run afoul of Chinese sensibilities. Recall when Daryl Morey, then the general manager of the Houston Rockets, tweeted in support of the Hong Kong protests in 2019.

Morey deleted the offending tweet while Houston Rockets owner Tilman Fertitta distanced the team from the bomb that had been armed. The Chinese Basketball Association subsequently froze ties with the Houston Rockets over Morey’s “improper remarks” as the Shanghai Pudong Development Bank dropped support for the franchise. By October 2019, rumors swirled that Beijing had demanded his firing. China would flex its muscles to signal its displeasure with Morey for many months.

One year later, in October 2020, Morey announced his resignation. The news was well-received in China.

Business ties between Hollywood, sports teams, and corporations in the United States are increasingly bringing a wide array of interests under the thumb of the Middle Kingdom. Accompanying this essentially colonial project is censorship that stifles even mild criticism of Beijing. Now it appears that the United States government is subsidizing that censorship.

Data assembled by independent researchers recently revealed that the Wuhan Institute of Virology in China, the lab at the center of the coronavirus outbreak, received federal grants from the nonprofit EcoHealth Alliance.

“The U.S. nonprofit, set up to research new diseases, has also partly funded deeply controversial ‘gain of function’ experiments, where dangerous viruses are made more infectious to study their effect on human cells,” The Daily Mail reported.

Between 2017 and 2020, EcoHealth Alliance received more than $123 million from the federal government. The Department of Defense alone has forked over $39 million to the charity since 2013. It’s unclear how much of that ended up in the purse of the Wuhan Institute of Virology. However, researchers noted that between 2017 and 2020, grants from the Pentagon included $6,491,025 from the Defense Threat Reduction Agency with the description: Understanding the risk of bat-borne zoonotic disease emergence in Western Asia.

Even after “gain of function” research was banned in 2014—ironically, due to concerns that it could inadvertently trigger a pandemic—EcoHealth Alliance continued to provide funding through a loophole.

Last February, Daszak published a letter in The Lancet, an influential medical journal. He convinced more than two dozen other scientists to sign their names to it, effectively raising the professional cost of suggesting the coronavirus leaked from the Wuhan lab. Daszak noted with praise China’s pandemic containment efforts.

He also ended up on the team tasked by the World Health Organization to identify the cause of the virus. Jamie Metzl, a former high-level Clinton administration staffer, told The Daily Mail that the appointment was a “massive and outrageous conflict of interest.” Thus, the international agency, which is intimately connected to China, enabled a man “who had significant financial and reputational stakes in discrediting lab leak theories to investigate those theories,” Metzl said.

It recently came to light that economic advisers turned then-President Donald Trump away from confronting Dr. Anthony Fauci about funding the Wuhan Institute of Virology. The parent department of the National Institute of Allergy and Infectious Diseases, which Fauci heads, is Health and Human Services. EcoHealth Alliance is estimated to have funneled $3.4 million in government funds from the National Institutes of Health to the Wuhan lab.

But senior advisors, among whom Larry Kudlow is implicated, militated against the idea of confronting Fauci and demanding Chinese accountability. As with Hollywood and the NBA, capital played into the hands of the Chinese Communist Party. Further still, award-winning journalist Sharri Markson found that when the intelligence community sought to determine the nature and origin of the coronavirus, it turned to EcoHealth Alliance's Daszak for consultation. With the input of Daszak and other interested parties, the Office of the Director of National Intelligence published a statement saying the virus could not have been engineered.

A supposedly Chinese saying, a curse, in fact, comes to mind: “May you live in interesting times.” The most “interesting” aspect of the U.S.-China relationship is that the ruling class and elites of the former seem to be helping, at times celebrating, the latter’s rise.