The Secret Is Out: The U.S. Air Force Has Russian MiG-29s To Dogfight 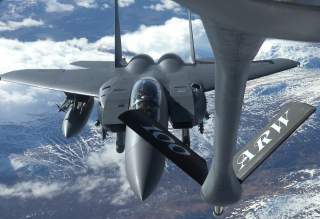 Soviet-built jets are likely to be expensive to maintain in the United States. But if a contractor is willing to bear the cost and it benefits the Air Force to buy those services, it might be a worthy venture.

As the United States Air Force continues its struggle with fielding enough aggressor aircraft for its combat aircraft crews to train against, contractors are stepping up to the plate.

In some cases, contractors are able to field remarkable aircraft that provide an exceptionally authentic replication of enemy aircraft. Such is the case of Air USA—the company has managed to acquire three two-seat trainer versions of the Mikoyan MiG-29UB Fulcrum.

Russian defense reporter and analyst Diana Mikhailova details how the company acquired the two-seat trainer version of the potent Soviet fighter in her blog.

There are also other companies that offer impressive Red Air capabilities—Tactical Air Support and Draken International are among a number of firms that offer similar services. While TacAir flies the Northrop CF-5 Freedom fighter, Draken boast of a fleet composed of everything from advanced trainers to MiG-21s.

Meanwhile, even an aircraft as capable as the Sukhoi Su-27 Flanker have made it into private hands. Pride Aircraft helped to import two of the powerful air superiority fighters from Ukraine. It’s not clear where the two jets ultimately ended up, but recently a Flanker was spotted engaged in a dogfight over the Nellis Air Force Base, Nevada, range with against an F-16.

While it is possible that the Su-27 belonged to the U.S. Air Force—and former Air Combat Command commander Gen. Hawk Carlisle, who once flew with the 4477th Test and Evaluation Group, once told me he had flown a Flanker—it might have been one of the two jets acquired from Ukraine.

Years ago, I spoke to Gerry Gallop—a former Grumman F-14 Tomcat pilot—who travelled to Ukraine to help purchase the two Su-27s. Gallop was impressed with the sheer performance of the Soviet-built jet.

The jet stayed supersonic for much longer than expected. “We brought it back to min burner, but I’m cruising at 1.3 Mach,” Gallop said. The two-seat Flanker was clean and it was demilitarized–which means it weighed about 3000lbs less than the typical stock Su-27, but nonetheless, the jet was impressively fast especially at high altitude. Slowing the Flanker down after almost 25 minutes of supersonic flight also showed interesting results.

“I take it out of burner and I’m just at mil power and the speed dropped down to–I was still supersonic,” Gallop said. “By the time we got done, 25 minutes supersonic, I looked at the gas and go ‘you know I could turn around fly back the way I came supersonic and still have a normal amount of gas left to land.’”

Back to the topic at hand, Soviet-built jets are likely to be expensive to maintain in the United States. But if a contractor is willing to bear the cost and it benefits the Air Force to buy those services, it might be a worthy venture.