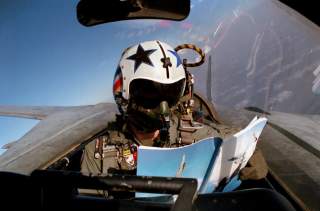 Although the word “selfie” didn’t come into popular use until the early 21st century, people have been taking self-photos since the dawn of photography. Pilots (and other aircrew) took selfies back in the day, and Wikipedia even shows a selfie that astronaut Buzz Aldrin took during a spacewalk in 1966.

I started carrying a camera shortly after I joined my first F-14 squadron (VF-24, 1981) and got comfortable enough in the jet. Pretty soon I was taking selfies. Being a RIO, I had a lot of space to work with: the whole area above the radar display was open, and with that spacious canopy I was limited only by my arm’s length and ability to push the shutter while holding the camera out. I shot with a typical 35 mm camera – it wasn’t too heavy, and with a little practice, I could manage the shutter. Here’s one of my early attempts: 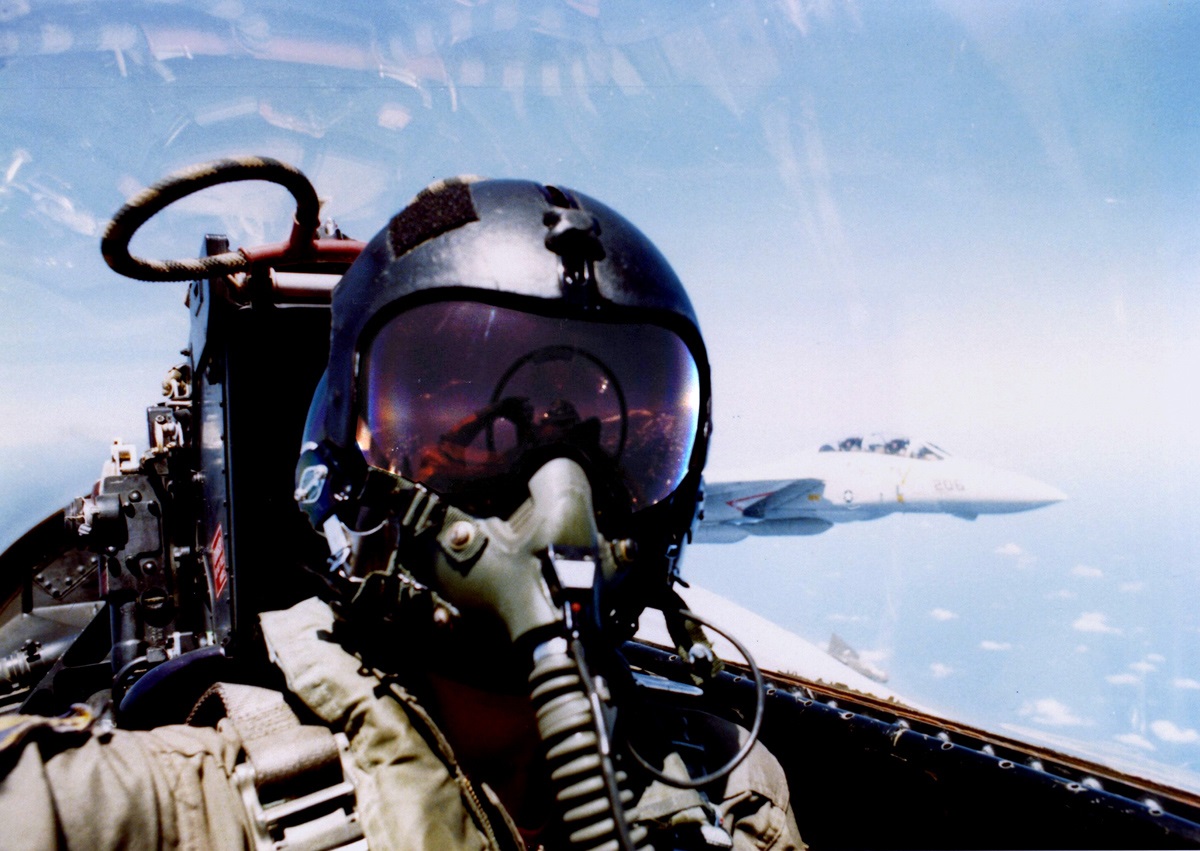 That’s our wingman in the background. I might have gotten better results if I’d taken multiple shots or been more diligent evaluating the results and adjusting my technique. But this was during a deployment in 1981-82 and of course I was shooting on film, so it was about three weeks between the time I took the photo, mailed it to the USA for processing, and got the photos back. Selfies just weren’t a priority for me.

Another photo from that tour may be interesting, not as a selfie but because it gives a sense of what the F-14As’ TF30s looked like in zone 5 … at night … from the cockpit. In case you can’t quite tell what’s what, that’s my blurry face in helmet and oxygen mask on the left side of the image, and one of our tails above the burner glow. My tinted visor was up since it was night time. As I look at this now, I think of photos that I could’ve taken if someone had invented the digital camera about 20 years sooner.

After VF-24 I reported to Topgun as an instructor, where I managed to get a few decent selfies in the F-5F before and after the dynamic dogfights that filled our demanding flights. The F-5F had a roomy cockpit for such a small aircraft. This shot shows Topgun’s other two F-5Fs alongside my jet. 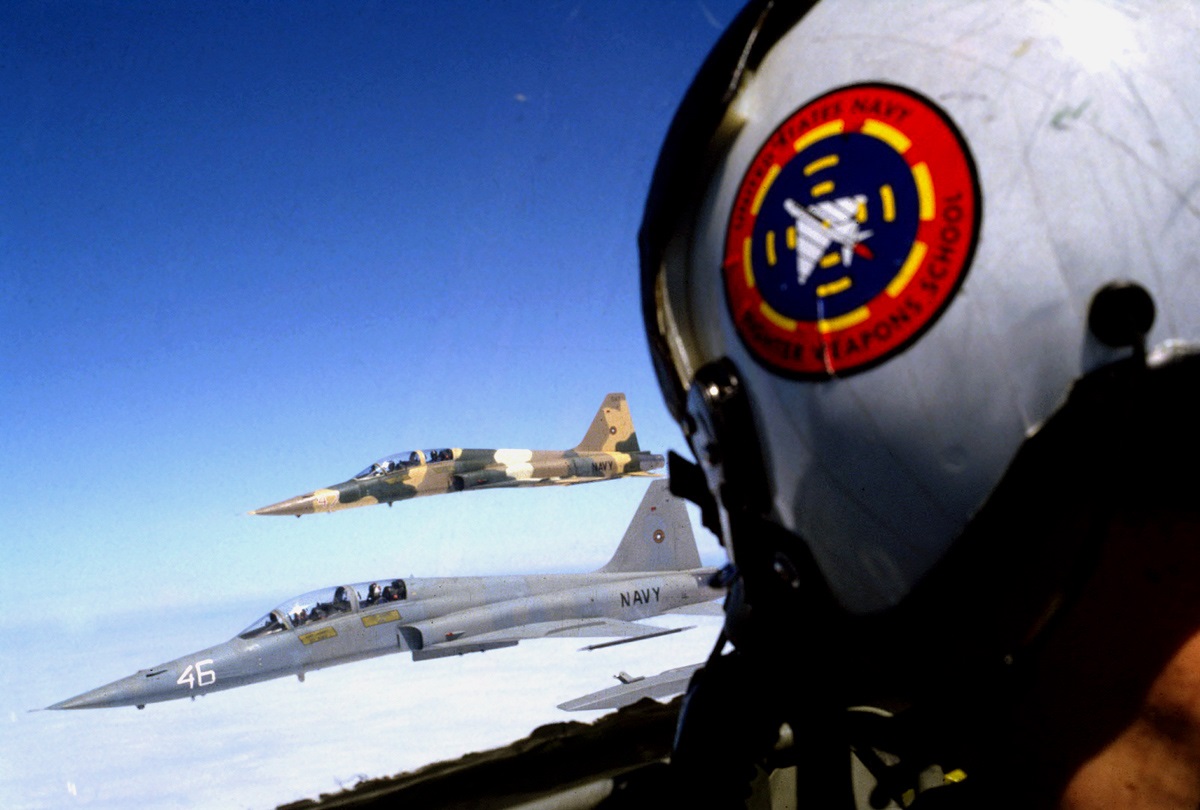 In 1987 I reported to my second F-14 squadron, VF-2, and was able to pursue photo ideas that had been percolating – including more selfies. By the way, we generally called them “face shots,” which was also the slang term for forward-quarter Sidewinder missile shots. At VF-2 I tried a few more dramatic shots such as this one taken just after the cat shot: 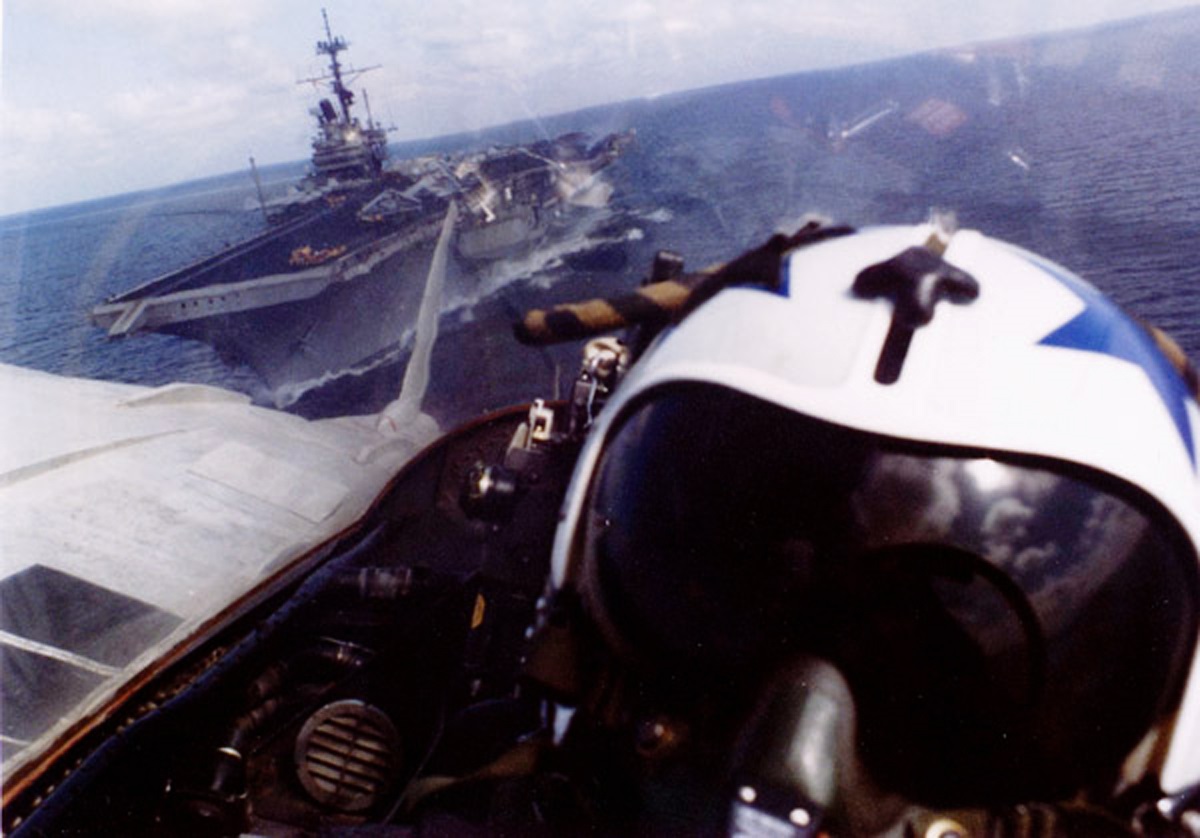 I was most likely influenced by the work of other RIOs, especially “Tumor” Twomey, who created some of the best “face shots.” His work can be seen in the commemorative book, Grumman F-14 Tomcat: Bye-Bye Baby…! Some pilots also took good selfies, such as “Nick” Nickell, who published some of his along with a great article on The Drive website.

After looking critically at my images, I realized that I needed a wide angle lens and a way to mount the camera at a distance greater than my arm’s length. The wide angle was easy, as I recall it cost around $40. The camera mount took a little thought, but eventually I took a collapsible tripod and used zip ties (cable ties) to securely attach a Vise Grip tool to one leg. Once we were airborne, to use the tripod I unstrapped from my ejection seat and clamped the Vise Grip to a metal tab on the back of the pilot’s ejection seat! Believe me, I coordinated with my pilot before doing this, and I selected a tab that wasn’t movable. I also used a 6-foot cable release to take photos.

I was always looking for opportunities to get more coverage for VF-2, and one of the best publications at the time was the Tailhook Association magazine, The Hook. So I came up with the idea to take a photo of myself reading an issue of The Hook in the cockpit. The new wide angle lens and tripod rig were perfect for this shot. Our combat air patrol (CAP) flights over the Indian Ocean provided the opportunity to get the shot, since they were often solo airspace patrols, involving no “combat” and sometimes not even any training. I discussed the photo with my pilot, Pager, and he was game. I set up my equipment, got out a copy of The Hook, and shot about 10 frames as Pager did the gentle roll we’d discussed.
Three weeks later when I got the pictures, I saw one keeper: 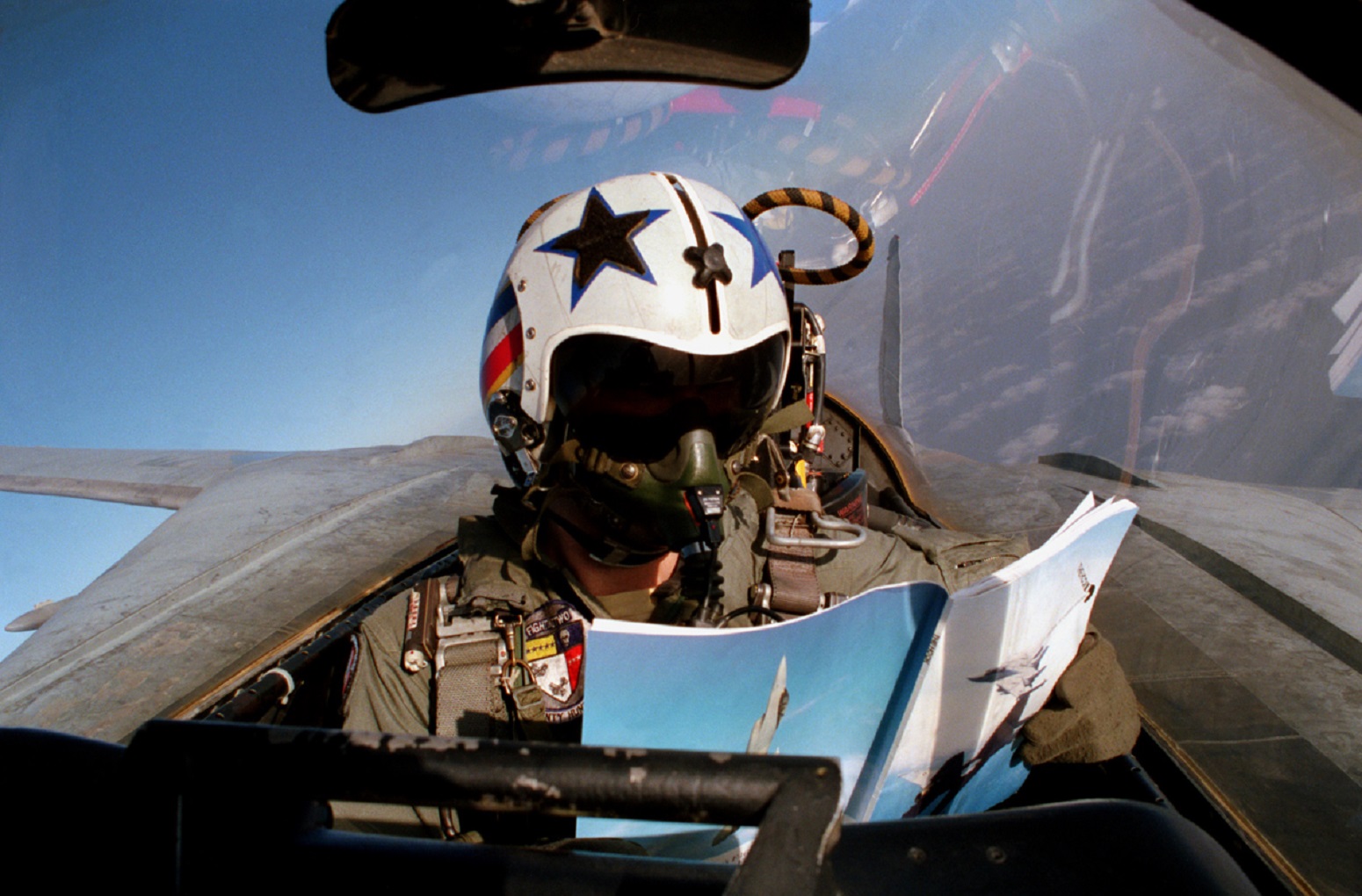 None of the other shots were good, mostly because as we rolled inverted the cockpit was in shadow and no details could be seen. I sent in the photo and was happy to see it published in The Hook. Once we returned from deployment I gave the negative to the Miramar Photo Lab, which sent it in the Navy Office of Information in the Pentagon. Not much else happened until the Navy digitized their photo collection a few years later and made it available online. After that, this photo appeared in several publications, websites, and collections of humorous military photos – none of which crossed my mind when I shot the photo in 1987.

Looking at it now, there are two things I wish I’d done differently. First, I should’ve turned the other direction so the magazine front cover was more prominent, instead of the back cover. Second, I wish I’d made my own name visible somewhere; nametag, oxygen mask, something. But I can assure you, that’s me.

In addition to the Hook magazine photo, I used the rig to take a few other photos, such as this shot when I was flying with Lumpy in 1989 on a humid day above the Indian Ocean. The vapes on top of the wing and wingtip vortices were fascinating to see and I was glad to capture them. 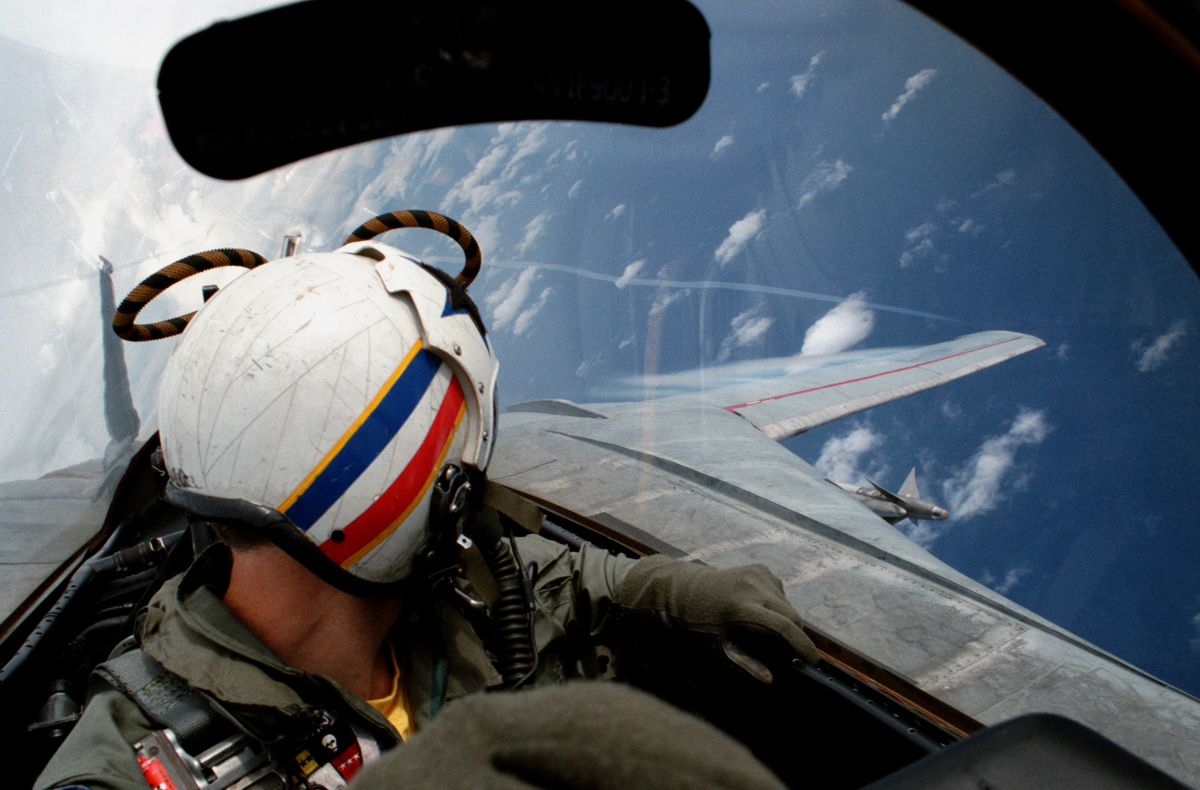 If you’ve ever seen that photo of the aviator reading the magazine, now you know the full story. One more thing: The Hook is still a great magazine!

One sharp-eyed reader pointed out that the issue of The Hook magazine that Bio is reading in the cockpit selfie was the Spring 1989 issue, and he’s correct! That means the photo was taken in 1989 while flying with Lumpy, instead of 1987 while flying with Pager.

Bio is an occasional contributor to The Aviation Geek Club and the author of two books, Topgun Days and Before Topgun Days. He’s working on a third book of F-14 Tomcat experiences.