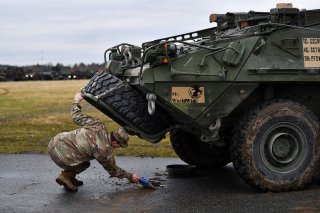 Secretary of Defense Lloyd Austin spoke on Thursday at NATO headquarters in Brussels, Belgium. Austin traveled to Europe to meet with allies as Russia deployed thousands of troops along Ukraine’s borders.

“As President Biden said a couple of days ago, we will, if we must, defend every inch of NATO territory,” Austin said during a press conference.

Although public statements from Russian leadership continue to stress that Russian troops will leave the region following their exercises, Austin said the United States has Russian forces moving closer to the border.

“We see (Russia) add to the more than 150,000 troops that they already have arrayed on that border even in the last couple of days,” he said. “We see some of those troops inch closer to that border. We see them fly in more combat and support aircraft. We see them sharpen their readiness in the Black Sea. We even see them stocking up their blood supplies.

“You know, I was a soldier myself not that long ago, and I know firsthand that you don't do these sort of things for no reason, and you certainly don't do them if you're getting ready to pack up and go home.”

While Austin said the United States remains open to continued dialogue with Russia to achieve a peaceful and diplomatic solution, he appeared much less optimistic that Russia might share this sentiment.

“I leave here incredibly proud of the alliance and satisfied in the knowledge that we will be sure-footed in the face of aggression, but dedicated, as always, to the prospect of peace,” he said.

Austin reinforced the United States’ commitment to NATO allies in Eastern Europe. The United States has deployed additional troops to Poland in recent weeks. Austin said that Bulgaria will host a company of American Stryker armored fighting vehicles that will deploy from Germany in the coming weeks.