See This A-4E Skyhawk Jet? It Took a Hit from a Deadly SA-2 Missile (And Survived) 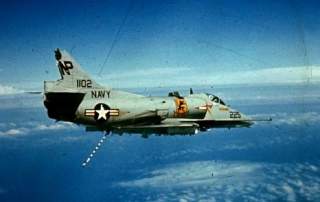 Noteworthy LTJG Al Crebo wasn’t able to get his stricken A-4E back aboard USS Bon Homme Richard (CV 31) but it did keep flying long enough for him to get back out over the water and for pictures to be taken.

As told by Tommy H Thomason in his book Scooter! The Douglas A-4 Skyhawk Story, on a strike launched on Apr. 25, 1967 from Bon Homme Richard to destroy an ammunition depot near Haiphong, his A-4E Skyhawk was tagged by an SA-2 as he rolled in for his bomb run. The detonation blew off his rudder, the top of the vertical fin, and several access doors as well as taking out both hydraulic systems and knocking the horizontal stabilizer askew. There were large holes in the aft fuselage and the wings.

Since he was on his way down anyway, he began his dive and dropped his bombs on the target. At that point, he realized that he had no hydraulics and pulled the control disconnect to be on manual control. Muscling out of the dive and back to wings level, he was able to get out over the water and head toward the ship.

Even though he was able to lower the nose gear and the tailhook, without the main landing gear down he wouldn’t be allowed to land back aboard even using the barricade. In any event, the engine finally quit and he had to eject. He was picked up almost immediately and was flying again the next day.

Crebo received the Silver Star and Purple Heart for his harrowing mission.