See This Old B-52 Bomber? She Keeps Getting Better with Age. 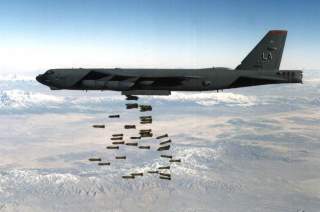 Key point: In coming years, the B-2 will be armed with next generation digital nuclear weapons such as the B-61 Mod 12 with a tail kit and an Long Range Stand-Off weapon

The US Air Force and BAE Systems are accelerating efforts to sustain, test and help modernize weapons carrying, sustainment and delivery across its fleet of bomber platforms.

The system, called the Bomber Armament Tester, is intended for the B-1B, B-2 and B-52H bombers; the intent of BAT is to assess operational readiness of bomb ejector racks, rotary launchers and pylon assemblies, BAE statements indicated.

While primarily oriented toward testing, readiness and sustainment, the BAT effort is simultaneously interwoven with ongoing Air Force weapons modernization initiatives for all of its bombers. The concept is to both position the platforms for current or near-term attack missions and advance efforts to architect the fleet such that it can modernize its weapons arsenal and adjust as new technologies emerge.

For bot current missions and expected challenges moving forward, BAT is, without question, expected to function as an integral component to testing and integration of both new and upgraded bomber fleet weapons.

Throughout a series of reports and interviews, senior Air Force officials and service weapons developers have discussed a wide range of near and long-term weapons modernization initiatives with Warrior Maven.

In coming years, the B-2 will be armed with next generation digital nuclear weapons such as the B-61 Mod 12 with a tail kit and an Long Range Stand-Off weapon or, LRSO, an air-launched, guided nuclear cruise missile, Air Force weapons developers have said in numerous previous interviews with Warrior Maven.

The B-61 Mod 12 is an ongoing modernization program which seeks to integrate the B-61 Mods 3, 4, 7 and 10 into a single variant with a guided tail kit. The B-61 Mod 12 is being engineered to rely on an inertial measurement unit for navigation, service officials told Warrior Maven.

Alongside its nuclear arsenal, the B-2 will carry a wide range of conventional weapons to include precision-guided 2,000-pound Joint Direct Attack Munitions, or JDAMs, 5,000-pound JDAMs, Joint Standoff Weapons, Joint Air-to-Surface Standoff Missiles and GBU 28 5,000-pound bunker buster weapons, among others, according to officials who have talked to to Warrior Maven.

The B-2 can also carry a 30,000-pound conventional bomb known as the Massive Ordnance Penetrator, a B-2 pilot told Warrior Maven in an interview several years ago.

In recent years, the historic B-52 bomber has been able to carry JDAM weapons externally, but through a currently ongoing Internal Weapons Bay Upgrade, the aircraft will be able to internally house some of the most cutting edge precision-guided Joint Direct Attack Munitions and Joint Air-to-Surface Standoff Missiles, among others, service platform developers told Warrior Maven.

Pilots and B-52 modernization experts have said that having an increased internal weapons bay capability affords an opportunity to increase fuel-efficiency by removing bombs from beneath the wings and reducing drag.

Developers have added that a second increment, to finish by 2022, will integrate more modern or cutting-edge weapons such as the Joint Air-to-Surface Standoff Missile, or JASSM, JASSM Extended Range (ER) and a technology called Miniature Air Launched Decoy, or MALD. A MALD-J “jammer” variant, which will also be integrated into the B-52, can be used to jam enemy radar technologies as well.

The Air Force B-1B bomber is expected to deploy an air-launched the emerging Long Range Anti-Ship missile (LRASM) against a wide range of targets.

Beginning as a Lockheed Martin, DARPA and Office of Naval Research effort, the LRASM weapon has recently upgraded to more advanced sensor technology.’

While many of the particulars of the new sensor for the weapon are not available for security reasons, BAE Systems developers do explain the technology in a general way.

For instance, BAE developers say the precision routing and guidance technology of the sensor is able to operate in a GPS-denied environment and doesn’t rely exclusively on intelligence, surveillance, and reconnaissance systems, networking links, or GPS navigation, BAE statements have said. The new sensor enables the missile to operate more effectively in contested domains and all weather conditions, day or night, officials said.

BAE Systems is a subcontractor to main LRASM developer Lockheed Martin. Production of the sensor comes shortly after Lockheed received the first LRASM production contract award from the Navy and Air Force.

Once operational, LRASM will give Navy ships a short and long-range missile with an advanced targeting and guidance system able to advance attack technology by striking moving targets and partially guiding its own way to enemy targets. Unlike many existing weapons, designed to operate against fixed or very slow moving targets, technical advances engineer the weapons achieve wider range of pinpoint strikes - including open or shallow water.

With a range of at least 200 nautical miles, LRASM is designed to use next-generation guidance technology to help track and eliminate targets such as enemy ships, shallow submarines, drones, aircraft and land-based targets, according to Lockheed Martin developers.

The Navy has previously released LRASM from an F/A-18 Super Hornet, involving a "jettison release" of the weapon designed to validate the aerodynamic separation models of the missile, developers explained.