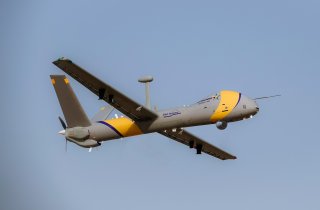 A new type of large drone, capable of doing surveillance or border security and other missions, may be flying over civilian airspace of countries in the near future. While large drones have generally been used in maritime areas or to conduct surveillance and strike missions as part of the global war on terror, in contested battle spaces, there is a need for them to finally be able to fly in the same areas as commercial aircraft. Elbit Systems, one of Israel’s largest defense companies and drone manufacturers, has built the Hermes 900 StarLiner—a UAV that is fully compliant with NATO’s Standardization Agreement known as STANAG 4671. It can be integrated into NATO members airspace and certified for civilian airspace.

The StarLiner was announced in 2018 and, like most complex hi-tech large drones, it must go through rigorous paces to meet the needs of militaries. It has conducted Civil Aviation Authority certified flights over Masada, the historic Jewish desert fortress that dates from the Roman era which overlooks the Dead Sea. It is supposed to be delivered to Switzerland and other customers in the future.

StarLiner and the concept behind it are part of the challenges that drone manufacturers face. Israel is a historic pioneer in drones, once dominating the global market. However, new competition from China and other countries presents a challenge. One issue is that large medium-altitude long-endurance drones, known by the acronym MALE, face questions as to how they can be used both abroad to monitor terror groups, but also at home. This is controversial because UAVs got a negative reputation during the War on Terror as they were accused of carrying out deadly and unregulated airstrikes in places like Pakistan. Revelations that a drone monitored recent protests in the United States has been reported as if there is something intrinsically wrong with using an unmanned plane rather than a manned helicopter to conduct surveillance for law enforcement.

Today, drones are carrying out more missions that go beyond the popular military role that systems like Predator or Reaper have been used for. This includes more maritime missions or border security and counter-drug smuggling. Israel’s solutions, and particularly Elbit’s model, is to see the future of drones as more about adding different capabilities to the existing successful platforms. That could mean more sensors, more artificial intelligence, or even the ability to do search and rescue missions. In May, Elbit’s Hermes 900 UAV was delivered to an unnamed Southeast Asian country with a new ability to help rescue people at sea. This means instead of sending numerous piloted aircraft to search the ocean for missing mariners, a drone can be sent to drop life rafts, saving pilots several hours of time.

With the need to integrate drones for more missions that might take place in civilian airspace, Elbit built the StarLiner, based on the success of the Hermes 900. The Hermes 900 is a large drone with a weight of 1,180 kg that can fly up to thirty-six hours up to 30,000 feet with a payload of 350kg. This format of the Hermes is comparable in function and appearance to the Predator or Reaper. It also came with experience, rolled out when Elbit’s smaller Hermes 450 had some 170,000 flight hours in 2009 and would reach 300,000 several years later. The Israeli Air force said the Hermes 900 was operational during its 2014 conflict with Hamas.

Hermes 900s have been sold all over the world, especially in Latin America, and it has been used by the UN and EU. Israel’s Globes media reported in 2017 that the unit cost was several million dollars, but customers who buy UAVs don’t buy just one airplane, they buy the container to operate it, communications and also several platforms so that they can be flying them at all times, even if one needs to be on the ground for maintenance or changes in payloads.

Where does StarLiner fit into all this? Instead of narrowly tailored missions, such as searching for insurgents in Mali, a multi-mission capable large UAV that can fly in non-segregated civilian airspace in places like Europe is a necessity today. Starliner has a diesel engine and has been improved to fly in bad weather conditions. It is to be fitted with radar cooperative and non-cooperative Detect and Avoid (DAA) features for Remotely Piloted Aircraft Systems (RPAS). What this means is that in congested airspace you may have aircraft that properly move to avoid collisions, but you may have aircraft that, for whatever reason, do not. Scientific academic studies have looked at this problem of integrating UAVs into civilian airspace.

The idea is that the Starliner will have triple redundancy in its ability to avoid collisions. This is the future Israelis think of in terms of new drone technology. Western countries will be buying more UAVs, and the market for these kinds of medium-altitude long-endurance models is already some $2.5 billion globally. But it’s a competitive market. However, on the civilian or homeland security use of these larger UAVs, no one so far is buying Turkish, Chinese, or Russian drones to do border security in Europe. Israel would like to play a greater role in these areas, especially at a time when the United States is reluctant to export its Predators and Reapers, and as the Eurodrone concept unveiled in 2018 has gotten off to a slow start. There are others out there with similar ideas, such as Leonardo’s Falco Xplorer, which since 2019 is targeting the civilian non-segregated airspace.

Countries are buying up drones at an increasing rate, seeking to outfit military units from the platoon level up with an array of multi-layered UAV systems from the smallest quadcopters to giant drones like the U.S. Global Hawk that Iran shot down in 2019. Israel’s Elbit sold more than one thousand drones to one unnamed Asian country last year and is upgrading its Hermes 900 for another country in South America. Many of these customers are classified, which reveals the degree to which drones are still seen as controversial or secretive. With UAVs like the StarLiner, that likely won’t be the case as drones come into the limelight as it were. The race is on now to have more drones ready and certified for civilian airspace. Elbit says it is ready for that new frontier.