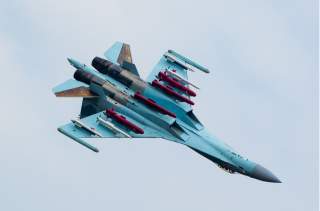 On Aug. 10, 2019, the Turkish pro-government daily Yeni Şafak reported that the Turkish Undersecretariat for Defense Industries (SSM – Savunma Sanayii Mustesarligi) asked the Millî Savunma Bakanlığı (MSB – Turkish Ministry of Defense) to formally weigh in on the possible purchase of Russian Sukhoi Su-35 Flanker. According to Scramble Magazine, it will start official negotiations with Russian state agency ROSOBORONEXPORT if the military approves the proposal.

This request obviously follows the removal of Turkey from the F-35 program last month when Turkey received the first installments of the S-400 ground based air defense missile systems from Moscow.

As we have previously reported, White House press secretary Stephanie Grisham said, in a statement on Jul. 17 that the country’s involvement in the F-35 program has become “impossible.”

“Unfortunately, Turkey’s decision to purchase Russian S-400 air defense systems renders its continued involvement with the F-35 impossible. The F-35 cannot coexist with a Russian intelligence collection platform that will be used to learn about its advanced capabilities. The United States has been actively working with Turkey to provide air defense solutions to meet its legitimate air defense needs, and this Administration has made multiple offers to move Turkey to the front of the line to receive the U.S. PATRIOT air defense system. Turkey has been a longstanding and trusted partner and NATO Ally for over 65 years, but accepting the S-400 undermines the commitments all NATO Allies made to each other to move away from Russian systems."

Grisham continued: "This will have detrimental impacts on Turkish interoperability with the Alliance. The United States still greatly values our strategic relationship with Turkey. As NATO Allies, our relationship is multi-layered, and not solely focused on the F-35. Our military-to-military relationship is strong, and we will continue to cooperate with Turkey extensively, mindful of constraints due to the presence of the S-400 system in Turkey.”

According to Yeni Şafak, if the MSB gives a thumbs up, Turkey will start official negotiations with Russia to go from F-35 to Su-35. If the Russian approach does not yield the appropriate results, jet fighters produced by China and/or Pakistan will also be taken into consideration.