See Ya Later, F-35: Britain's 6th Generation Fighter Is In the Works 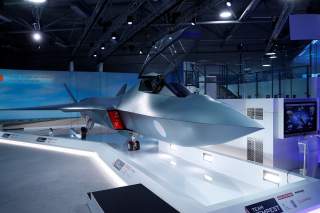 The Tempest fighter was unveiled last year at the Farnborough Air Show, as part of a sweeping military modernization program to maintain British combat capabilities over the coming decades. The project, inaugurated with an initial R&D infusion of 2.6 billion dollars, is slated to enter serial-production in the 2030’s. As per the presentation, the Tempest fighter will come equipped with a who’s who list if sixth-generation features: seamless command over auxiliary drones,  optional manning capabilities, machine learning, and artificial intelligence integration.

The Farnsborough presentation model depicts a delta-wing, twin vertical stabilizer design, reminiscent of the FCAS fighter and older F-22 Raptor. The final product will likely differ from this early mockup, however; the Tempest is at such an early stage in its development cycle that design changes are all but expected. The Tempest was shown alongside Meteor and SPEAR 3 missiles, with a new series of “deep strike” missiles confirmed to be in development for both the Tempest and its FCAS counterpart.

This, however, is where the similarities between Tempest and FCAS fighter end. It was apparent from the manufacturer’s infographics and presentation that the FCAS plane adheres closely to the F-35’s data fusion philosophy, serving as a mobile nerve center for processing and disseminating battlefield information across nearby friendly units. Meanwhile, military analyst Justin Bronk concludes that the Tempest is prioritizing “agility,” speed, and other kinematic performance areas at the expense of stealth capabilities. This suggests that the British are eyeing an air-superiority role for the Tempest, which would make sense considering that they have no plans of abandoning their level 1 partner status in the F-35 program despite moving ahead with Tempest. The manufacturer, BAE Systems, is positioning Tempest not as a replacement, but as a complement to the F-35.

This begs a pressing logistical question, one to which the British military-industrial complex does not readily have an answer: how does the Royal Air Force aim to procure and maintain not one, but two advanced stealth fighter fleets?

When Britain first announced its sixth-generation fighter, it was speculated that Europe’s FCAS project may be rolled into the Tempest program with Airbus as a partner. But on the heels of a post-Brexit pall over the British-EU defense relationship, Tempest is proceeding as an entirely different project from the FCAS fighter. This is much to the irritation of the EU, which is just now emerging as a major player in the military hardware market; as French President Emmanuel Macron put it, “Competition amongst Europeans when it weakens us against the Americans, the Chinese, is ridiculous.”

These political squabbles complicate Britain’s quest for external funding, without which the Tempest can never be produced in militarily meaningful numbers. In an encouraging sign for Britain, several European arms manufacturers  have indicated their willingness to participate in both the Tempest and FCAS projects. Likewise, Italian defense firm Leonardo S.p.A. has signed on to co-develop Tempest. Nonetheless, the Tempest project will need many more high-profile partners to remain financially solvent over the coming decades; the British defense sector has their work cut out for them.