The Self-Propelled Howitzer Is Ready to Roll 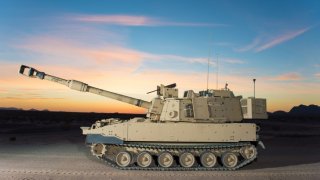 The M109A7 variant is an upgraded vehicle that was engineered to fire precision rounds that can destroy enemy trucks, combat vehicles and force concentrations at long ranges. It has been under development for many years. The upgraded weapon has a digital backbone, a six-hundred-volt onboard power system capable of supporting and sustaining a new generation of electronics, and targeting and computing technologies.

The forty-ton howitzer will deploy with an advanced rate of fire of up to four rounds per minute to support advancing infantry, soften or weaken enemy defenses or pinpoint specific high-value targets at unprecedented ranges.

The laser-guided “S” round Excalibur incorporates several key innovations to include seeker enhancements and laser-tracking sensors able to follow a “designator” or “spot.” This kind of laser designation can enable a “spot” to stay on a target as it moves.

The new howitzer has an electric drive and digital backbone, which supports a new generation of artillery that greatly enhances targeting, precision and blast effects. The howitzer will be configured to incorporate the military service’s Extended Range Cannon Artillery (ERCA) technology. This effort has already shown that an adjusted cannon can successfully fire precision-guided Excalibur rounds twice the distance of traditional artillery. Over the years, artillery was capable of firing roughly thirty kilometers, and the ERCA program has already demonstrated it can fire sixty-two to seventy kilometers.

The new M109A7 howitzer is engineered to support modern tactics, strategies and combat maneuvers associated with a new generation of threats. Initially, artillery was thought of as an “area” weapon intended to lay down “suppressive” fire to enable forces to maneuver in combat. The advent of precision-targeting in recent decades has reshaped the way people see and use 165-millimeter weapons in combat. Now, long-range precision-guided artillery can be used to pinpoint high-value targets on the move at unprecedented ranges amid fast-changing battlefields.