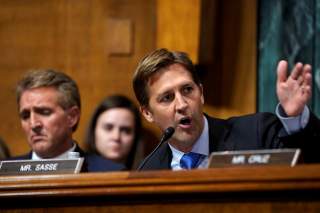 GOP Nebraska Sen. Ben Sasse said Wednesday that his fellow Republicans “ought not to be rushing to circle the wagons” around President Donald Trump over his pressuring of the Ukrainian president to investigate former Vice President Joe Biden and his son.

Sasse also knocked Democrats who demanded the president’s impeachment before they had viewed the whistleblower complaint at the heart of the Ukraine matter.

“Republicans ought not to be rushing to circle the wagons to say there’s no there there when there’s obviously lots that’s very troubling there,” he continued. “The administration ought not to be attacking the whistleblower as some talking points suggest they plan to do.”

Sasse added that getting to the bottom of the Ukraine issue “is going to take a lot of time but there’s obviously some really troubling things here, but I think the partisan tribalism that is always insta-certain is a terrible idea.”

The Nebraska senator was one of only a few Republicans to break with the administration over the Ukrainian issue.

Republican Pennsylvania Sen. Pat Toomey said in a statement that Trump’s conversation with the Ukrainian president “was inappropriate” but “does not rise to the level of an impeachable offense.”

“If the President asked or pressured Ukraine’s president to investigate his political rival, either directly or through his personal attorney, it would be troubling in the extreme. Critical for the facts to come out,” Republican Utah Sen. Mitt Romney tweeted Wednesday.