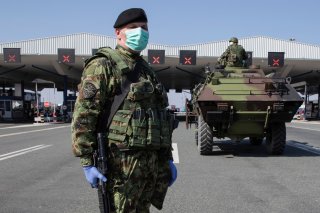 Key point: With Croatia a client of the West, and Serbia enjoying closer ties to Russia, it is natural for both nations to seek arms from their patrons.

Still angry after NATO’s 1999 bombing campaign, Serbia has unveiled a new guided rocket that sends a message to its neighbors: if you help NATO bomb us, we’ll bomb your cities.

Serbia’s new Sumadija is a truck-mounted weapon that can hit targets 175 miles away. IHS Jane’s describes it as a four-hundred-millimeter rocket with a 440-pound warhead and an inertial-navigation guidance system.

A defense expert in Serbia, which fought Bosnia and Croatia in the 1990s and was bombed by NATO in 1999 over the Kosovo conflict, told Russian media that those missiles will fly if Serbia’s neighbors help NATO again.

“This is exactly what Serbia needed to prevent its regional neighbor’s possible participation in the 1999 aggression against us,” Miroslav Lazanski, a military analyst for Serbian newspaper Politika, told Russia’s Sputnik News. “The Sumadija can also hit big cities in neighboring countries.”

“Hopefully no such conflict will ever happen,” Lazanski said. “But if it does and someone is crazy enough to make his airspace available to any third country willing to attack Serbia [like Bulgaria did in 1999], we now have a missile to reach all the strategic cities in the region.”

Meanwhile, Serbia’s archrival Croatia is shopping for a new fighter to replace the nation’s aging MiG-21s. “The two leading contenders for the planned contract reportedly include Lockheed Martin’s F-16 and Saab’s JAS-39 Gripen,” according to Defense News. “Considered alternatives comprise the French Mirage, Israel’s Kfir, as well as a variant of South Korea’s T-50.”

Even with the additional MiG-29s, Serbian air strength will only be a fraction of the of the former Yugoslavia’s air force before the country splintered during the early 1990s. During NATO’s 1999 bombing campaign, Serbia lost five MiG-29s shot down in 1999, four by American F-15s and F-16s, and a fifth downed by a Dutch F-16.

With Serbia and Croatia rearming, is war coming to the Balkans? Some Balkan analysts say the arms purchases don’t necessarily presage an arms race in the region. With Croatia a client of the West, and Serbia enjoying closer ties to Russia, it is natural for both nations to seek arms from their patrons.

But the Serbian missiles are also a warning that if NATO attacks Serbia again, the Serbs will retaliate against any neighboring state that assists the alliance.