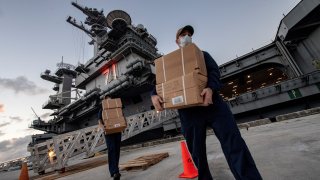 Guam is one of the United States’ most important bastions in the Western Pacific—but protecting it won’t be easy.

Stationing in the Navy’s Standard Missile 6 (SM-6) on Guam is an absolute must, U.S. Navy Rear Adm. Tom Druggan effused during comments made to the United States Naval Institute’s maritime security series at the Center for Strategic and International Studies.

Guam is one of the United States’ most significant western-most outposts in the Pacific. The island hosts a large naval base and air facilities. It is nearly as far west as Japan If a conflict were to break out in the Pacific, then the island would play an outside role as a resupply and stop-off point.

Given Guam’s strategic importance, and in light of increasingly sophisticated Chinese military capabilities, the Navy would like to thicken the island’s security blanket.

The SM-6 is a “fantastic missile, just absolutely great missile” thanks to the diversity of targets it can intercept,” Druggan explained. It is also the Navy’s “leading defense capability for hypersonic missile defense.” Not only can the SM-6 engage fast and slow-moving ballistic missiles, but it can target airplanes and helicopters on land and at sea.

Although the Navy deploys the SM-6 on its Arleigh Burke-class guided-missile destroyers, Navy officials have voiced support for staining SM-6 missiles on or near Guam on a semi-permanent rather than a rotational basis.

Adm. Phil Davidson, the previous U.S. Indo-Pacific commander, lauded the idea, explaining that “the Guam defense system brings the same ability to protect Guam and the system itself as the three DDGs [Arleigh Burke-class guided-missile destroyers] it would otherwise take to carry out the mission.”

“We need to free up those guided-missile destroyers, who have multi-mission capability to detect threats and finish threats under the sea, on the sea and above the sea, so that they can move with a mobile and maneuverable naval forces that they were designed to protect and provide their ballistic missile defense,” Davidson said.

Several solutions to Guam’s defense are swirling around defense circles. One proposal would see the Navy’s outgoing Ticonderoga-class cruisers permanently moored around the island, leveraging their powerful air defense capabilities. In addition, if a more robust onboard radar could be integrated onto the ships, their deep 120-missile magazines could offer Guam a robust defense.

Though systems like the SM-6 missile are indeed capable, optimizing this sea-based missile for use on land is untried. Though the Navy has had some success adapting their Aegis system for land use, if the Navy will use that air defense system in Guam remains uncertain despite the island’s increasing importance.