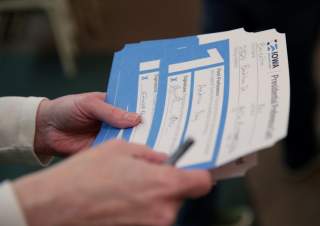 The firm behind the phone app that caused delays in reporting the results of the Iowa Democratic caucus is operated by three Hillary Clinton campaign veterans.

Iowa Democrats intended to use the app, created by Shadow Inc., to make it easier for the state’s 1,700-odd precincts to report the results of their individual caucuses. But officials at precincts across the state reported that they had trouble operating the app and submitting the voting data.

The Iowa Democratic Party, which said that it may have the results of the caucus available by Tuesday, had kept the identity of the app creator a secret in recent weeks as cyber security experts have questioned whether the technology was vulnerable to hackers.

Shadow Inc.’s website has scant information about the firm and its employees. But a review of social media accounts shows that three of the Washington, D.C.-based firm’s top executives worked on the 2016 Hillary Clinton campaign.

The CEO of Shadow Inc., Gerard Niemira, was the director of product on Clinton’s campaign, his LinkedIn profile says.

Ahna Rao, the product manager for Shadow Inc., was the special assistant to the chief technology officer on Clinton’s campaign, according to her LinkedIn profile.

Krista Davis, the chief technology officer at Shadow, was a software engineer on Clinton’s campaign, according to her LinkedIn profile.

The former South Bend mayor came under some criticism Monday for declaring himself victorious despite the dearth of results.

Iowa, you have shocked the nation.

By all indications, we are going on to New Hampshire victorious. #IowaCaucuses