Shock Trials: Why the U.S. Navy Is Dropping Bombs Near Aircraft Carriers 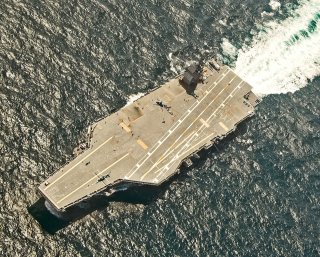 Bombs can hurt aircraft carriers, but America builds its warships to withstand a lot of damage, including nearby blasts.

The entire concept of the USS Ford’s upcoming shock trials is to find out just how much destruction, damage or explosive impact the new ship can survive. The preparation for this process, which includes detonating bombs in the ocean near the ship to tests its durability, is now underway in the Atlantic Ocean on board the Navy’s USS Ford, according to an interesting USNI report from aboard the ship.

Naturally, a key aim of the process is to assess what if a ship, such as a large carrier, had to take a hit? How might it survive and hold up? At what point or under what kind of combat impact might it be rendered inoperable? These are questions Navy weapons developers need to consider as they build resiliency and redundancy into their platforms.

This is where “shock trials” come in, a process which involves exploding bombs in the ocean of various sizes and at different distances from the ship, to simply assess its ability to withstand massive enemy attacks. Interestingly, a 2007 Department of Defense-directed study on shock trials by the MITRE corporation explains that much of the risk to surface ships comes not only from the prospect of direct impact but from what the study calls “non-contact explosions where a high-pressure wave is launched toward the ship.”

The shock vibrations alone from a nearby explosion can knock out key ship systems and “incapacitate the ship,” the study writes.

The MITRE analysis, called “Navy Ship Underwater Shock Prediction and Testing Capability Study,” further specifies that, following a nearby explosion, the bulkhead of a ship can oscillate, causing the ship to move upward.

These dynamics further underscore several reasons why there has been so much concern about long-range, precision-guided Chinese anti-ship missiles such as the DF-26, a weapon reported to reach as far as 2,000 nautical miles. The point with this being, should an approaching missile miss making actual impact upon the hull or structure of the carrier, it could still inflict crippling damage.

This may be part of why the Navy is making such rapid progress with efforts to refine and add new ship-defense technologies based upon networking and air-surface-unmanned systems integration. The farther away an approaching missile is discovered, seen, tracked and identified, the better the options to intercept, disable or destroy it. This seemingly self-evident, yet critical, tactical phenomenon is part of why the Navy has such interest in data sharing between surface-ship-based radar and sensing systems and aerial nodes such as a surveillance drone or even an F-35.

This kind of dynamic sheds light upon the inspirational rationale for the Navy’s now-deployed Naval Integrated Fire Control-Counter Air (NIFC-CA), a destroyer-mounted ship system which connects ship based radar with an aerial sensor node such as an F-35 or Hawkeye surveillance plane to find and track approaching enemy missiles from beyond the horizon. Not only that, the NIFC-CA system includes the use of an SM-6 interceptor which can pick up on signals coming from both ship-based radar systems and aerial surveillance nodes to destroy the approaching threat well before it comes close enough to damage the ship. While deployed on destroyers and not carriers, the NIFC-CA systems encompasses key concepts and specifics of relevance to layered ship defenses, as destroyers often flank carriers in Carrier Strike Groups to at least in part, defend them.