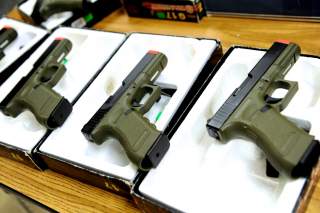 Key point: These two guns are among the best, but people like them for different reasons.

The Glock 17 and Sig Sauer P226 are two of the most popular handguns on the American firearms market. Both found success in the military and law enforcement markets because they are known as practical, reliable handguns that pack serious firepower. Although similar from the outside, the two have considerable differences on the inside.

The 1980s saw the invasion of the so-called "Wonder Nine" pistols—high capacity nine-millimeter handguns that often used advanced lightweight materials and were primarily European in origin. These new, innovative handguns took America by storm, riding high on their technological sophistication in a market still dominated by older semi-automatic pistols and revolver designs.

The Glock 17 was in the vanguard of the European invasion. Invented by novice gunmaker Gaston Glock for an Austrian Army handgun competition, the Glock 17 benefitted from Glock’s relative lack of knowledge and willingness to piece together his design from a variety of sources. The short recoil locked breech design came from the 1911-series handgun, while the double-stack magazine came from pistols like the Browning Hi-Power.

One major difference from other designs was Glock's use of a striker firing system, in which a striker is partially cocked when the slide is pulled back and released. The trigger pull fully cocks a striker fired pistol, so a resting, loaded pistol is inherently unable to shoot. As the trigger is pulled, a Glock handgun disengages two further safeties that otherwise prevent accidental discharge. The downside is that the Glock cannot be decocked without removing the magazine from the firearm, pulling back the slide, and removing the live round from the barrel.

The Sig P226 followed the Glock in the American market and achieved considerable success, particularly among police departments that insisted on a manual safety or decocker. A product of the Swiss-German partnership of Sig Sauer, the P226 was an evolution of one of the most accurate and well-made handguns ever made, the Sig P210. The P210’s design was updated for the U.S. Army handgun competitions of the 1980s. While it failed to win the Army contract, it did become the handgun of U.S. Navy SEAL commandos.

One of the significant differences between the P226 compared to the other "Wonder Nines" was the Sig's operating system. Unlike the Glock 17, the P226 retained the more traditional hammer and firing pin system of earlier semi-automatics. A double action/single action gun, the Sig's hammer could be cocked back for a lighter, shorter trigger pull or fired with the hammer down, resulting in a longer, heavier trigger pull. The P226 also featured a decocker that allowed the hammer to be dropped safely without unloading the gun.

The P226 had also made earlier inroads into the U.S. military service. Navy SEALs, wary of the Beretta M9 after a handful of incidents involving cracked slides and injuries, adopted the P226 as the Mark 25. The Pentagon was slower to adopt Glock handguns, but the Austrian handguns eventually found their way into the 75th Ranger Regiment and Delta Force. In the world of law enforcement, on the other hand, Glock handguns hold a commanding lead over all other brands, although the P226 does enjoy a level of popularity.

Dimensionally the two handguns enjoy the lead in various areas. The P226 is shorter but wider, whereas both guns’ barrel lengths are almost identical. The Glock weighs two ounces less than the all-metal Sig fully loaded while fitting two more rounds in the magazine. Both have a reputation for accuracy and reliability.

Overall, the Sig Sauer P226 and Glock 17 both have their advantages and disadvantages. The Sig is appealing to those who desire a slightly shorter handgun and a manual safety or decocker. The lighter Glock, on the other hand, is a little easier to carry on a daily basis. Neither is decisively better than the other, leaving the choice between the two a matter of priorities and taste. The European invasion of the 1980s changed the gun industry for the better, leaving American gun owners and operators with more quality choices than ever before.