This Shotgun Company Claims Its MC1sc Is Better Than a Glock 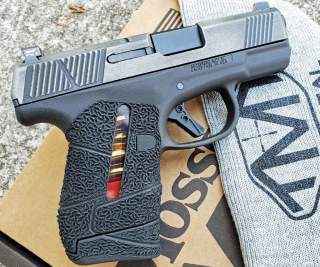 Key point: Just because Mossberg & Sons are good at one kind of weapon doesn't mean they can instantly make another kind with the same kind of success.

Mossberg is a company most well known for their shotguns, including the renowned 500/590 pump action and 930 semi-automatic shotguns.

But earlier this month, as part of their 100th anniversary of being in business, Mossberg announced that they would be entering the pistol market with their new MC1sc, a 9mm single stack pistol designed for concealed carry.

The 9mm single stack in general is already one of the best selling categories of guns selling right now. It’s not difficult to see why: 9mm single stack pistols are easy to conceal, big enough to fight with, easier to reload than comparable .38 snubnose revolvers, and offer more stopping power than a .380 pistol.

The MC1sc has a 3.4 inch barrel, and has either a 6-round 7-round capacity depending on the magazine. It also sports dovetail cuts in the slide and steel three dot sights. The magazines for the MC1sc are clear, and as an added bonus, the pistol will also accept the same magazines as the Glock 43 as well.

While it will take many more years for the MC1sc to develop a track record comparable to a Glock 43, Smith & Wesson Shield, or Walther PPS, so far it appear to be a very refined and ergonomic weapon that will be a solid concealed carry option. The weapon has already been tested thoroughly by the Gunsite Academy, where it ran more than one thousand rounds without any failures or issues whatsoever.

Current MSRP on the MC1sc is $400, which means that it should hit the shelves at gun and sporting good stores for well below that amount.