Should America Sell This U.S. Ally Stealth B-21 Bombers? 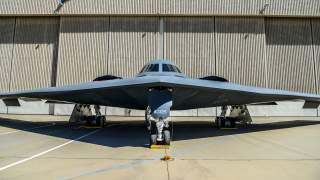 Australia needs to consider its options for projecting greater military power in an age where we can’t assume that we’ll get assistance from the US whenever and wherever we need it.

In my recent Strategist series on projecting power with the F-35, I looked at options to overcome the jet’s inherent range limitations so it can project further into the vast expanses of the Indo-Pacific. It can be done to some extent, but all scenarios require large-scale investment in enabling capabilities—ranging from air-to-air tankers to off-shore bases—as well as capabilities such as ground-based air defence to protect it.

I’d planned to examine the full range of strike options before unveiling the punchline—namely, the B-21 Raider strategic bomber. But since ASPI analyst Catherine McGregor has reported that two former air force chiefs think we need strategic bombers, I’ll cut to the chase and look at whether that’s a viable option.

As context let’s review some history. Australia has operated long-range bombers in the past—the ‘G for George’ Lancaster bomber occupies pride of place in the Australian War Memorial. In the European theatre in World War II, the RAAF flew Halifax, Wellington and Lancaster bombers, and it also operated long-range strike aircraft including B-24 Liberators in the Pacific.

In the post-war period, Australia operated the Canberra bomber. The Canberra’s range was limited and it was replaced with the F-111C, which had a combat radius of over 2,000 kilometres as well as the ability to be refuelled mid-air. That put Jakarta within its range, and while it’s debatable whether Australia would have ever considered bombing our neighbour’s capital, the capability itself certainly got the Indonesians’ attention. And that’s the point of high-end strike capabilities—they act as a deterrent and shape others’ thinking even if they’re never used.

This article by Marcus Hellyer first appeared at the Australian Strategic Policy Institute.