Should Americans Fear a Chinese Attack? 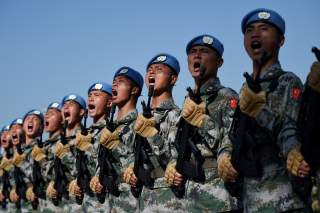 “The United States is most afraid of death,” said Rear Admiral Luo Yuan on December 20, 2018, to an audience in the southern Chinese city of Shenzhen. “We now have Dong Feng-21D, Dong Feng-26 missiles. These are aircraft carrier killers. We attack and sink one of their aircraft carriers. Let them suffer 5,000 casualties. Attack and sink two carriers, casualties 10,000. Let’s see if the U.S. is afraid or not?”

Luo, who has a history of bellicose statements, is nonetheless seen as reflecting thinking in the senior ranks. He was the second Chinese military officer in December, just days before the fortieth anniversary of America’s recognition of the People’s Republic on January 1, to publicly urge an unprovoked attack on American vessels.

In China, there is war talk, and not just from the officer corps. “China’s hottest new read” at the moment is a re-issuance of a collection of 1938 speeches of Mao Zedong. On Protracted War warned a country then in the midst of both civil and external strife that the Chinese people would have to endure long hardships before prevailing over enemies.

At a time Chinese state media is full of venom for the United States, the current popularity of Mao’s message is a warning. It is possible Chinese leadership figures are talking war as a way to prevail in factional infighting.

The Party, in any event, looks to be in turmoil. Its Central Committee, composed of the organization’s top 380 officials, did not hold its Fourth Plenum of the 19th Congress this year as expected.

Observers in the fall had thought that, given the severe challenges facing the Chinese economy, ruler Xi Jinping would call the Fourth Plenum before the end of the year to take up pressing issues of structural reform.

And there was one more reason for the Central Committee to hold the plenum. “U.S. policy on China has markedly shifted from engagement to competition, a development that threatens the regime survival,” noted the always interesting SinoInsider site in late October. “Thus, Xi Jinping has a need to assemble the Party elites at a plenary session to get them on the same page to cope with internal and external crises.”

So why was there no Fourth Plenum? “My guess is that Xi has completed his power concentration and simply does not care about convening another plenum to avoid making unnecessary waves,” a prominent China watcher e-mailed me this week, writing on condition of anonymity. “He alone can decide all things. This is exactly what Mao Zedong did, i.e., holding plenums very sporadically when he had total control and very frequently when he wanted to purge his comrades.”

As Xi is known to be an admirer of Mao and a copier of his stratagems, it is plausible that China’s leader is fully in control.

Most China watchers, however, subscribe to the opposite narrative, that Xi’s position is increasingly precarious. As SinoInsider observed early this month, “If no Fourth Plenum is held, this means that the factional struggle is extremely intense and Xi is in grave danger.”

“Some analysts,” writes leading China watcher Willy Lam of the Chinese University of Hong Kong, “believe that Xi’s unpopularity among regional officials could be one reason why he has decided not to convene the Fourth Plenum of the Central Committee this year.”

This explanation is consistent with the many observations that Xi’s opponents are blaming him for policy failures, like the quickly slowing economy and trade friction with the United States. Having accumulated almost-unprecedented power, the “Chairman of Everything, Everywhere, and Everyone” has no one to blame.

It’s not surprising then, that on December 18, 2018 Xi gave a contentless speech marking the fortieth anniversary of the Third Plenum of the 11th Central Committee, the event considered to be the start of China’s “reform era.” He had little of substance to say, many think, because the Party is so divided. And there was an additional sign of division: neither Jiang Zemin nor Hu Jintao, Xi’s two immediate predecessors and still rivals, attended his 13,000-character, nearly 90-minute oration.

Whether or not the Xi-is-falling theory is correct, it’s clear the failure to hold the Fourth Plenum is significant. Even after Xi’s assumption of power at the end of 2012, the Party operated with monotonous regularity. National Congress meetings were convened every five years and plenums, held between the Congresses, occurred in a predictable pattern.

Many fans of the Party—and some of its critics like Columbia University’s Andrew Nathan—hailed the regularity, saying the ruling organization had developed rules and norms and had solved the problem of succession, the key weakness of authoritarian regimes. For instance, Nathan is famous for many reasons, including coining the phrase “authoritarian resilience.”

But the Communist Party is pattern-bound—and resilient—no more, however. This year, the Third Plenum, usually reserved for matters of economic reform, was held not in the fall, as custom dictated, but in February. Xi, it appears, hijacked it to talk about governance issues, perhaps his removal of the term limit for the state presidency. And, as noted, the Fourth Plenum, meant to cover the issues normally taken up by the Third, was not convened at all.

It’s bad enough that Chinese military officers are regularly threatening to attack the U.S. Navy, but it’s worse they are doing so at a time of evident turbulence at the top of the Communist Party. Outsiders may not know what is happening in Beijing, but everybody can see the symptoms of distress in senior circles.

The Trump administration has begun to shift its approach to Beijing, issuing, for instance, the National Security Strategy last December. In that landmark document, China is labeled, along with Russia, a “revisionist power.” That’s a start toward a more realistic view, but the Chinese state appears far less stable and much more aggressive than the document portrays. It’s possible, for instance, that a failing China will lash out.

That’s an especially disturbing possibility now that belligerent Chinese officers are convincing themselves they can launch surprise attacks on the U.S. Navy and kill thousands of Americans.

Gordon G. Chang is the author of The Coming Collapse of China. Follow him on Twitter @GordonGChang. This piece was originally featured in December 2018 and is being republished due to reader interest.