Should Israel Fear The Sale Of U.S. F-35 Stealth Fighters To The UAE? 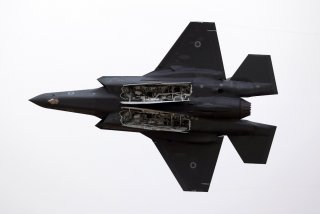 Today’s White House lawn ceremony for new peace agreements between the United Arab Emirates and Israel, and Bahrain and Israel, marks the most important breakthrough in Middle East peace since Jordan’s 1994 treaty with Israel. Yet, the expected American sale of advanced F-35 fighters to the UAE, which the Trump administration reportedly offered to facilitate the peace deal, necessitates the United States upgrade Israel’s military capabilities to ensure its qualitative military edge.

The UAE is an important U.S. partner, a stable, moderate Arab country that has fought against ISIS, the Taliban, and Iran. The United States has sold the UAE tens of billions of dollars in advanced weapons, but the stealth F-35 is the most advanced fighter in the world. In the region, Israel alone has F-35s, ensuring its “qualitative military edge,” or QME, over its neighbors.

For decades it has been U.S. policy—codified into U.S. law in 2008--to ensure Israel’s qualitative military edge (QME), which essentially means sustained Israeli military superiority that secures deterrence and if deterrence fails, then ensures clear, decisive offensive or defensive triumph at an acceptable cost to itself. Ensuring Israel’s QME also means the U.S. government needs to consider the impact of its regional arms sales on Israel’s security.

Securing Israel’s QME is not just about America’s bond with Israel and its interest in a safe Jewish state, but also about advancing additional U.S. regional interests. The Jewish Institute for National Security of America has argued that Israel’s concerted efforts to roll back and prepare for a major war against Iran’s regional expansion, and oppose other agents of extremism, strengthens U.S. security as America retrenches from the region. The United States thus helps itself when it bolsters Israel’s deterrence and self-defense.

Certainly, the UAE does not currently pose any threat to Israel, but Middle Eastern instability means today’s friend could become tomorrow’s adversary.

Iran, flush with U.S. military hardware, developed close security ties with Israel before the 1979 revolution transformed Tehran overnight into an archenemy. Egypt, well stocked with American weapons, was a stable presence along Israel’s south for decades until the extremist Muslim Brotherhood took control in 2011-13. Turkey, a secular NATO member since 1952, enjoyed close military ties with Israel in the 1990s before Recep Tayyip Erdogan came to power in 2003 and moved in an increasingly aggressive Islamist, anti-Israel, anti-Western, nationalist direction.

Israel has learned it must assume dramatic political change can erupt in its neighborhood at any time. Its safety, and U.S. regional interests, depend on Israel maintaining, with U.S. support, an advantage over all regional militaries, whether currently friend or foe.

Israel’s QME is further threatened by Iran and Turkey’s regional expansion and the acquisition by Arab countries of vast amounts of cutting-edge U.S., European, Chinese, and Russian weapons. These will accelerate as the international arms embargo on Iran lapses in October.

First, the United States should permit Israel to accelerate procurement under the bilateral 10-year memorandum of understanding (MoU) on U.S. defense assistance to Israel agreed in 2016 under President Obama by “frontloading” the MoU’s funds that are currently divided equally over ten years. This should include F-35s, new F-15X fighters, KC-46 refueling tankers, and other critical weapons systems. This also would boost U.S. jobs and could be achieved through various financing options without any additional overall U.S. cost.

Second, the United States should replace obsolete munitions in its prepositioned arms depot in Israel with precision-guided munitions. This could better enable U.S. regional operations and would be crucial for Israel in a major war with Iran or Hezbollah.

Third, the United States should release to Israel any directly relevant intelligence that is releasable to members of the Five Eyes agreement on signals intelligence sharing. Washington should also lower classification barriers to the mutually-beneficial bilateral sharing of certain intelligence, weapons and technologies, including radar and early warning capabilities.

Fifth, with the enormity of challenges to Israel’s QME already rendering many of the assumptions behind the current MoU moot, Israel and the United States should declare their intention to begin working on the next MoU that will commence in 2028, enabling Israel to access the next level of offensive and defensive weaponry to secure its QME.

The normalization of ties between Israel and UAE is a terrific achievement and a cause for celebration. The prospect of Emirati F-35s should also be a cause for much-needed upgrades to the U.S.-Israel security partnership, which will advance both countries’ interests.

Michael Makovsky, a former Pentagon official, is President and CEO of the Jewish Institute for National Security of America (JINSA).