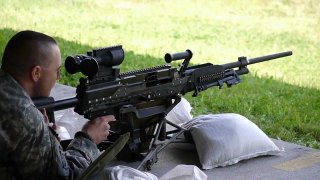 In January 2019, Sig Sauer, Inc. announced that USSOCOM finished safety certification of its new MG 338, its .338 Norma Magnum ammunition, and a companion suppressor. This marks the first steps towards adopting the MG 338, which will proceed onwards to field trials. The idea of a “medium-heavy” caliber machine gun for antipersonnel use with additional range than 7,62x51mm guns has tossed around by the firearms industry for a while. But what does the concept bring? Is Sig Sauer’s gun the right choice?

In marketing materials, Sig Sauer touts the MG 338 as one of the world’s best light machine guns, citing a variety of features: a free floating barrel, a reversible feed tray, easy caliber conversion to 7,62x51mm, a short-stroke piston operating system, and a “recoil reduction system”. The recoil-reduction system appears to involve letting the barrel recoil, similar to the Browning M2 .50 cal and larger artillery pieces.

But in practice, the recoil reduction system’s effect appears to be negligible when the MG 338 is shot from the bipod. In an Instagram video shot by 5.11 Tactical, a U.S. Army Special Forces veteran is seen shooting the MG 338 at SHOT Show 2020. Despite having a wide stance and bracing himself against the recoil, the machine gun violently pushes him around. While this is not necessarily representative of how the machine gun might recoil in combat conditions, as the machine gun was placed on a fabric mat that prevented the bipod from “digging in” and mitigating recoil, it’s clear that the MG 338 has significant recoil when shot from the bipod.

But it’s unlikely that the MG 338 will be shot from the bipod much. A lot of photos of the MG 338 in Sig’s promotional materials show the gun mounted on vehicles, where the large recoil becomes less of an issue, especially in shock absorbing mounts. From photos of the machine gun, there are already mounting points that work with existing M240 mounts, which means that the MG 338 probably is a “drop in” conversion for existing light vehicles various SOF units use.

In such a role, the MG 338 provides a compelling alternative to M240 and M2 machine guns in service. The standard M80 and M80A1 EPR rounds used in the M240 tend to run out of energy and start dropping significantly past 800 meters. On the other hand, the M2 has a far longer range, with its .50 BMG caliber rounds remaining effective out past 1.5km. But it is also incredibly heavy and hard to pack.

The MG 338 weighs less than 20 lbs, less than 1/4 of the weight of the M2, but has an effective range of more than 1 km. The ammo also weighs significantly less than the M2’s .50 BMG Lethality is around the same, as the .50 caliber round is overkill for most infantry targets.

As such, the advantages of the MG 338 as a vehicle and emplacement machine gun becomes clear. It retains most of the range of heavy machine guns while being far lighter, allowing for more ammo and equipment to be carried. The integration of the suppressor on the gun allows it to be fired in close proximity to supporting infantry, which can be important if the MG 338 is emplaced on a roof mount or remote control weapon system. Of course, the suppressor also decreases the firing signature of the machine gun in flash and sound, increasing the difficulty for enemy forces to return fire.

If USSOCOM likes the MG 338, it could prove interesting for the future of vehicle and emplaced weaponry around the world. But it likely doesn’t mean much for the average infantryman, besides proving that Sig Sauer, Inc.’s clean slate machine gun design works. If so, it could provide Sig an edge in the US Army’s NGSW competition, which also features a variation on the same design in the new 6.5 round.