Is the Sig Sauer MCX Virtus Patrol Better Than an AR-15? 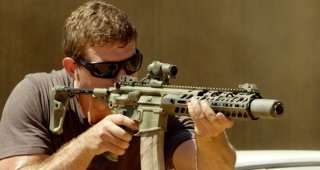 I refer to my go-to AR-15 as a Honda Civic. The Sig Sauer MCX Virtus Patrol (chambered in 5.56) is more like a Lexus. It’s somewhat of a luxury rifle, something you get when you can afford it rather than something you buy when you need it. It feels good to shoot. It’s accurate. It’s sleek, modular, soft shooting, basically anything you would really want out of an AR-15. But the trick is that this rifle is more like an AK platform on the inside. Yeah, I ended up loving this gun, but I’m not going to say you need to buy it now. Here's why.

I can’t deny the Virtus’s looks. That handguard is sleek. The boxy feel worked great for me, although I know it’s not everybody’s preference. On a surface level, it’s super familiar since all the controls are identical to what you’d find on an AR-15. You have the same fire control group, charging handle, bolt catch, and magazine release. These all worked fine, although the charging handle was a bit wobbly. It didn’t affect the performance though. That’s just a matter of what I like. The folding stock is very much the same. Not bad, not great. Neither of these things was bad enough for me to bother swapping them out.

I ran the Virtus with my typical rifle setup including a flashlight, stubby vertical grip, sling, and this time around a Low-Powered Variable Optic (LPVO) (Vortex Strike Eagle 1-6). The rifle and LPVO together had a phenomenal performance when it came to accuracy. Groups at a hundred yards were consistently under two inches and tightened up to an inch with a little focus. Groups out past that were a little more challenging, but still relatively easy to hit. You have the barrel to thank for that. It’s cold hammer-forged which makes it consistent and accurate. I don’t know the science behind it, but these types of barrels always perform better.

Recoil was also superior to my personal AR-15. It’s softer than your typical 16” 5.56 which is a huge plus although this cartridge isn’t particularly rough on the shoulders anyway. Still, the recoil is noticeably better. And that’s due to the gas system. It’s a short-stroke piston as opposed to most AR-15s outfitted with direct impingement. That means the Virtus Patrol doesn’t require a buffer tube. Less weight slamming back equals less recoil. Plus it can increase reliability.

It’s definitely a bonus when you use a short-stroke piston system. Since the gas doesn’t blow directly into the bolt, you get much less carbon build-up. You’ll see more failures when you have that stuff gunking up your gun. The Virtus had no problems with any ammo I threw at it, including steel-cased bulk ammo (what’s left of it anyway) even as the day went on.

The Sig Sauer MCX Virtus Patrol isn’t a rifle you should rush to buy right now. It’s pretty pricey. It is however a rifle you should definitely pick up if you have two grand burning a hole in your pocket. It’s well-built, accurate, and shoots like a dream.