Is the Sig Sauer P938 the Best Pistol for Concealed Carry? 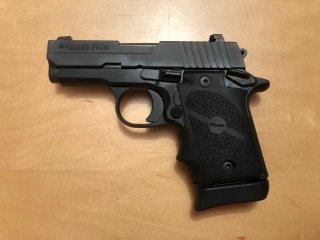 Have you ever wanted a small, subcompact 9mm pistol? I didn’t. Or at least I didn’t know I did. While I love a good 1911, I don’t usually seek them out as concealed carry weapons. All of mine are usually chilling out in my safe until I get the itch to take one out to the range. The Sig Sauer P938 has taken the 1911 platform, made it smaller and then set it up to take 9mm. It’s definitely interesting, but is it actually any good?

The P938 is a superbly designed pistol that hits all the checkboxes for a 1911. It has that classic thumb safety, beaver-tail, and exposed hammer we’ve all become accustomed to seeing. If you’ve owned a 1911 you’ll certainly be familiar with this. The one thing that’s really different is the takedown or disassembly, it's not a huge pain to actually do on the P938.

I do have to take a little bit of an issue with the size though. I know it’s supposed to be small, but man my pinkie hangs right off the grip if I use the stock six-round magazine. It’s not much an issue though since I like using the seven-round extended magazine anyway. That gives me full purchase on the weapon.

Obviously, this pistol was created with the purpose of being a concealed carry weapon. Its size complements carry phenomenally well. You can basically carry it at any location and still have it completely concealed, including pockets. Although I would say, if I only have six rounds to work with, I’m definitely going for a revolver. Either way, the capacity isn’t enough. Six or seven rounds of 9mm is not ideal for me. My Glock 43X with a Shield magazine gives me fifteen rounds to work with in a subcompact configuration. No win for Sig here.

You can expect a little bit of snappier recoil just by the nature of its size. It’s nothing you can’t handle, but it is indeed a little harder than what you might be used to in a compact or full-size pistol.

It is definitely a smooth shooter though. Accuracy is pretty on point at 10 yards or so. I wouldn't use it out too much further than that since follow-up shots get harder to perform with a smaller grip.

I found the P938 to cycle ammo efficiently and consistently but it’s worth noting that a few people have not had the same luck as I did with my purchase.

The cool factor is definitely there for the Sig Sauer P938 but I just don’t see it making its way into my concealed carry rotation. It lacks capacity and doesn’t really bring anything extraordinary to the table. Shooting it was fun but I’m not convinced it’s something I’d pick over my other range toys.