Sig Sauer's New Pistol is Worthy of a Super Villain 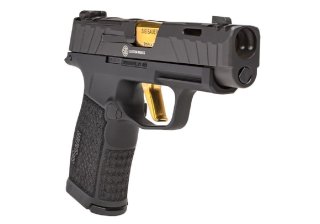 Fictional superspy James Bond can be seen carrying a Sig Sauer P226 in the latest 007 film, No Time to Die – a noted departure from his Walther PPK. Clearly Bond has changed for the times to a more modern firearm platform, and now Sig Sauer has introduced a compact pistol worthy of a supervillain – or at least well-respected henchmen.

This week, Sig Sauer announced the expansion of its Custom Works SPECTRE Series of pistols, which now includes the P365XL SPECTRE Comp. This new release from SIG Custom Works combines superior craftsmanship and the rich SPECTRE feature-set with cutting edge technology. The result is a compact pistol that offers less recoil for an enhanced shooting experience.

"However, the true standout feature of the P365XL SPECTRE Comp is the uniquely integrated compensator that reduces muzzle flip and felt recoil by up to 30 percent, and because of the design will never come loose or cause function issues," added Taylor. "The P365XL SPECTRE Comp offers all the benefits of a compensated pistol in a reliable, concealable, everyday carry package."

The Sig Sauer P365XL has already been among the best-selling micro-compact pistols in the country, and even redefined what many shooters expected from a concealed-carry pistol. Now it could make it all the more special. The SIG Custom Works P365XL SPECTRE Comp is built on the same 9mm polymer frame, but features the laser stippled XSERIES (LXG) grip module, an optics-ready slide with custom serrations featuring an optic plate and rear dovetail sight, integrated compensator, a titanium nitride gold barrel and XSERIES gold flat trigger, and X-RAY 3 day/night sights. The P365XL SPECTRE Comp is compatible with all 365XL holsters.